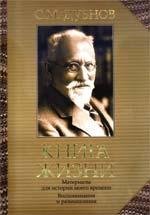 The memoirs of the outstanding historian, writer and social activist Semen Dubnov (1860-1941) are a true encyclopedia of Jewish life in Russia in the second half of the 19th - first two decades of the 20th centuries. He describes in great detail the main events in Jewish religious and spiritual life as well as his friends and other Jewish activists, writers and poets: Sholom-Aleikhem, Kh. Bialik, Ben-Ami and many others. This book consists of three chapters. The first two deal with the scientific, social and political life of Russia, the third is about Russian-Jewish emigration to Germany where S. Dubnov found himself in 1922. This second edition contains a new introduction and updated and enlarged comments and bibliographic notes.