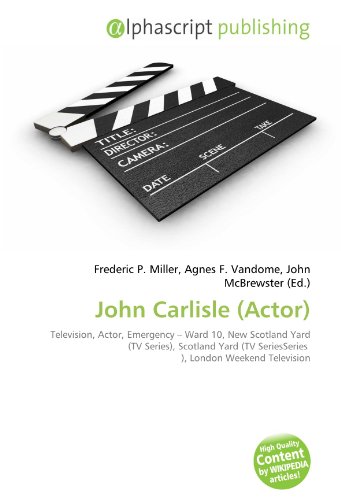 Please note that the content of this book primarily consists of articles available from Wikipedia or other free sources online. John Carlisle is a British television and stage actor. John Carlisle had regular roles in Emergency - Ward 10, Scotland Yard on ABC, 1957â€“1958, and the London Weekend Television series New Scotland Yard (1973) as Detective Sergeant (later Inspector) Ward. He also appeared in the BBC series The Omega Factor as the morally ambiguous psychiatrist Dr. Roy Martindale. He has also made one-off appearances in such popular series as The Avengers, Z-Cars, Dixon of Dock Green, Lovejoy, The Black Adder, Hustle, Holby City, Robin Hood, The Catherine Tate Show, Midsomer Murders, Kavanagh QC and Between The Lines.