Items related to Blessed and the Damned (Witch Hunter, PCI2408) 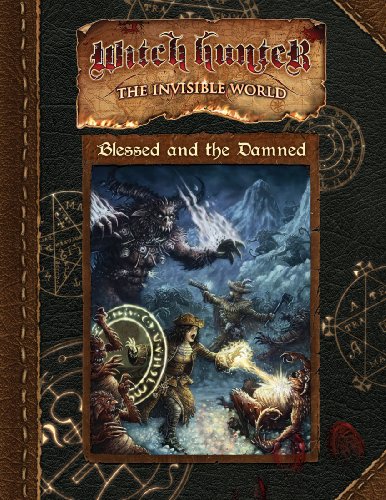 "You will tread upon the lion and the cobra; you will trample the great lion and the serpent." - Psalm 91:13 Unseen to most, the minions of the Adversary stalk the world, working deeds of great evil, rending the innocent and tempting the righteous to the service of the Adversary. Their tools are many, fear and violence, ignorance and greed. The land would be lost if it were not for the Orders of Solomon, the Witch Hunters. Witch Hunters, the chosen champions of mankind, are all that stands between the innocent and the fell beasts of the Invisible World. Take up your weapons of war and steady your resolve; for you are that champion, and this is your arsenal. Witch Hunter: the Invisible World is a role-playing game of swashbuckling adventure and horror set in a world much like our own 17th Century. Designed to accentuate the telling of a gripping story, Witch Hunter: the Invisible World uses an elegant and robust system that provides everything one needs to bring the Invisible World to life. If they are clever Witch Hunters will find the tools they need to defeat the forces of the Adversary within the pages of this tome, including: · Myriad backgrounds from which Witch Hunters are drawn · New Talents with which to best the Adversary's foul minions · Fight fire with fire using new sorcerous rites and traditions · Master the blade with expanded and new fighting traditions · Learn of the many native tribes of the New World and learn of the prophecy of the dooms of the Indian tribes · Delve into the mysteries of the Invisible World with new relics

Book Description Alligator Alley Entertainment, 2009. Condition: Good. A+ Customer service! Satisfaction Guaranteed! Book is in Used-Good condition. Pages and cover are clean and intact. Used items may not include supplementary materials such as CDs or access codes. May show signs of minor shelf wear and contain limited notes and highlighting. Seller Inventory # 777005740X-2-4

Book Description Paradigm Concepts, 2009. Perfect Paperback. Condition: Good. Connecting readers with great books since 1972. Used books may not include companion materials, some shelf wear, may contain highlighting/notes, may not include cdrom or access codes. Customer service is our top priority!. Seller Inventory # S_215555817