Items related to The Skill in Means (Upayakausalya) Sutra (English and...

The Skill in Means (Upayakausalya) Sutra (English and Sanskrit Edition) 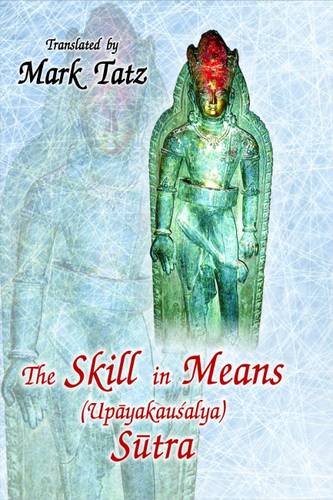 This rare sutra, ancient but timely, has long been treated with circumspection because of its liberal attitude toward sexuality and other ethical concerns. One of the original statements of the early Mahayana School, it is here collated from Chinese and Tibetan translations, and from passages that remain in the original Sanskrit. Originally part of a larger sutra on the six perfections that included the well-known perfection of Wisdom sutra, the Skill in Means sutra explicates the other five perfections of the bodhisattva. The translator has traced its source to verses of the Ratnagunasamcaya-gatha that have no counterpart in the Perfection of Wisdom. The Skill in Means is also found as part of the Ratnakuta collection of sutras, under the title "The Question of Jnanottara`. In Part One, this Sutra establishes the liberal, even anti-monastic observance of Bodhisattva ethics, especially in matters of sexual involvement, introducing `skill in means` into the fabirc of Buddhist ethical life. Parts Two and Three constitute a reinterpretation of the life of the Buddha, demonstrating his motivation by `skill in means`; this is a primary source for the Buddhology of the Mahayana. The older and newer versions are translated side by side; extant Sanskrit passages are included. An introduction places the text in historical and literary prospective. There are copious notes, indexes and a bibliography.

This little volume is a valuable contribution to the textual and doctrinal history of early Mahayana Buddhism. --Journal of the American Oriental Society

1. The Skill in Means (Upayakausalya) Sutra (English and Sanskrit Edition)