Items related to The Vimalakirti Sutra: From the Chinese Version by...

The Vimalakirti Sutra: From the Chinese Version by Kumarajiva 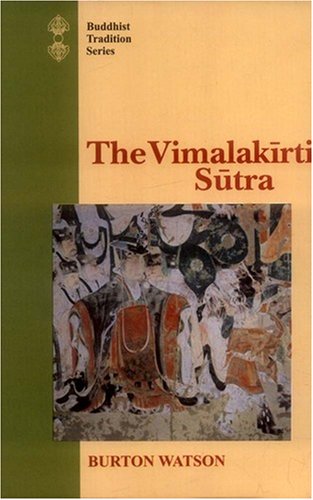 One of the most popular Asian classics for roughly two thousand years, the Vimalakirti Sutra stands out among the sacred texts of Mahayana Buddhism for its conciseness, its vivid and humorous episodes, its dramatic narratives, and its eloquent exposition of the key doctrine of emptiness or nondualism. Unlike most sutras, its central figure is not a Buddha but a wealthy townsman, who, in his mastery of doctrine and religious practice, epitomizes the ideal lay believer. For this reason, the sutra has held particular significance for men and women of the laity in Buddhist countries of Asia, assuring them that they can reach levels of spiritual attainment fully comparable to those accessible to monks and nuns of the monastic order.

Esteemed translator Burton Watson has rendered a beautiful English translation from the popular Chinese version produced in 406 C.E. by the Central Asian scholar-monk Kumarajiva, which is widely acknowledged to be the most felicitous of the various Chinese translations of the sutra (the Sanskrit original of which was lost long ago) and is the form in which it has had the greatest influence in China, Japan, and other countries of East Asia. Watson's illuminating introduction discusses the background of the sutra, its place in the development of Buddhist thought, and the profundities of its principal doctrine: emptiness.

Originally written in Sanskrit, this sutra is one of the most influential works in the Mahayana canon. This beautiful translation of Kumarajiva's popular Chinese version highlights the sutra's frequent touches of humor, the liveliness of its episodes, and its eloquent, orderly exposition of basic Mahayana tenets. Watson includes a brief history of early Buddhism and an introduction to the doctrine of non-dualism, a key tenet in Mahayana thought.

The Vimalakirti Sutra, one of the most influential works of the Mahayana Buddhist canon, is of particular importance in the Ch'an or Zen sect. Originally written in Sanskrit, probably in the first century c.e., it claims to record events more than four hundred years earlier. Noted for its eloquent, orderly exposition of the basic tenets of Mahayana, the text is also remarkable for the liveliness of its episodes and frequent touches of humor, rarities in a religious work of this type. The Vimalakirti Sutra is unusual in that its central figure is not a Buddha or Buddhas, but a wealthy townsman, Vimalakirti, who epitomizes the ideal lay believer. For this reason, and because of the sutra's enduring literary appeal, it has been particularly popular among lay Buddhists in China, Japan, and the other Asian countries where Mahayana doctrines prevail, and has exercised a marked influence on literature and art.

1. The Vimalakirti Sutra: From the Chinese Version by Kumarajiva