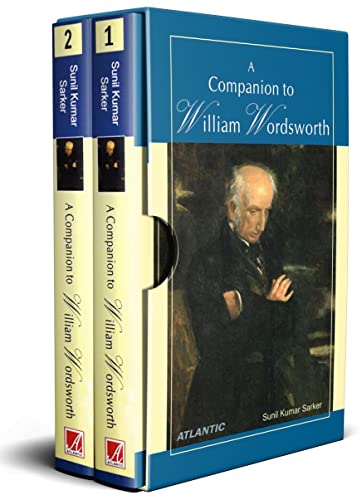 Volume 1-Part 1-1. Life and Works-Part 2-2. Twelve Select Poems of Wordsworth; (i) Tintern Abbey; (ii) The Thorn; (iii) A Night-Piece; (iv) The Simplon Pass; (v) Michael; (vi) Resolution and Independence; (vii) Ode: Intimations of Immortality; (viii) Elegiac Stanzas; (ix) Ode to Duty; (x) Solitary Reaper; (xi) She was a phantom of delight; (xii) Laodamia-Part 3-3. The five 'Lucy' Poems of Wordsworth; (i) Strange fits of passion have I known; (ii) Three years she grew in sun and shower; (iii) I travelled among unknown men; (iv) She dwelt among the untrodden ways; (v) A slumber did my spirit seal-Part 4-4. Six Select Sonnets of Wordsworth; (i) Composed Upon Westminster Bridge,; September 3, 1802; (ii) The world is too much with us; (iii) It is a beautious evening, calm and free; (iv) Milton! thou shouldst be living at; this hour; (v) Nuns fret not at their convent's narrow room; (vi) Scorn not the sonnet-Part 5-5. Wordsworth As a Romantic Poet; 6. Wordswoth's Theory of Poetry; 7. Wordsworth as a Poet of Nature-Volume 2-Part 5 (Contd.)-8. Wordsworth as a Poet of Humanity; 9. Wordsworth as a Philosophical Poet; 10. Wordsworth's Style; 11. Wordsworth as a Critic; 12. Appreciation and Criticism of Wordsworth; 13. Residuary Discussions on Wordsworth; 14. Wordsworth And Coleridge: Lyrical Ballads; (including Preface to Lyrical Ballads, 1802,; Appendix on Poetic Diction, and Essay; Supplementary to the Preface, 1815-Part 6-15. The Prelude-Part 7-16. The Excursion; Part 8; Appendices; Appendix I (Preface to Lyrical Ballads (1802)); Appendix II (Appendix on Poetic Diction (1802)); Appendix III (Essay Supplementary to the Preface; (1815))