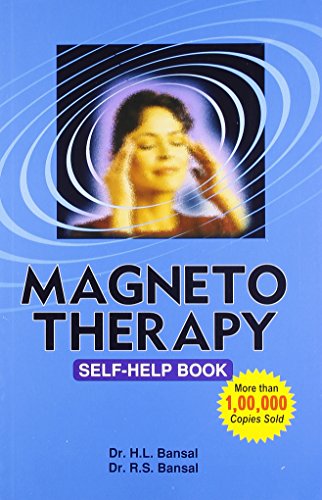 This is a complete book on the art of healing through magnets. It shows how magnetism effects the human body and suggests methods of treatment of various diseases.This book gives an interesting account of the importance of magnetism. It also records some of the difficult cases treated successfully with magnet therapy like paralysis, sciatica, arthritis, spondylitis, tumor and mental retardation.

A COMPLETE BOOK ON THE ART OF HEALING THROUGH MAGNETS

-Shows how magnetism effects the human body and suggests methods of treatment of various diseases with magnets and indicates where and how to apply them in 150 common diseases.

-Contains the details of about 200 cases of various diseases successfully treated with magnets by the author and other magnetotherapists.

-Establishes that Magnetotherapy is very useful in all types of diseases, especially worth-trying in conditions like Cervical spondylitis, arthritis, eczema and all painful conditions.

This book was originally published in 1976 and contained 176 pages only. It immediately caught attention of the medical profession and the general public, with the result that every year one or more reprints were published. It was also taken note of by the then President and Vice-President of India, in addition to various other celebrities. The response was so good that I reworked on the book, enlarging it to as many as 300 pages in the second edition, published in 1979.

The second edition drew a still wider market, and six years after its publication, we are now publishing a third, revised and enlarged edition. Meanwhile, the book has been published in a Hindi version also, titled 'CHUMBAK CHIKITSA' which has gone into several reprints.

In the present edition, all the acceptable suggestions have been adopted and incorporated. The first sub-head of each chapter has also been printed in this edition.

Electricity has been gaining ground in every sphere including Magnetotherapy. Electromagnets have been introduced in magnet treatment which are relatively more effective in many chronic ailments. A new chapter on 'Electromagnetotherapy' has been added at the end of this edition.

I hope that with the revision and additions mentioned above, the present edition of the book will be found more attractive, interesting and useful.

My labour will be amply rewarded if the learned readers patronise this revised and enlarged book and make full use of it by practising Magnetotherapy at their clinics, homes and by extending it to others. I shall, however, welcome experiences and new suggestions for further development of Magnetotherapy.

Book Description PAPERBACK. Condition: New. Book Cover and ISBN may be different from US edition but contents as same US Edition. Excellent Quality,Quick delivery, We may ship the books from Asian regions for inventory purpose. Our courier service is not available at PO BOX. Seller Inventory # nt_9788131901885