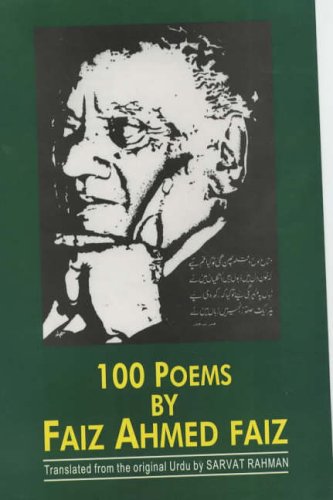 This chronological presentation of 60 poems, 10 quatrains, and no less than 30 ghazals—some never translated into English before—enables the reader to trace the development of the young and romantic poet into the foremost leader of the literary opposition to injustice and the defender of the oppressed. Includes biographical notes, a key to Roman transcription, a list of titles or first lines, and a glossary of Urdu words in Roman script.

Book Description Abhinav. Hardbound. Condition: New. Contents: Portrait of Faiz 1953. Preface. Biographical note. 1. Key to Roman transcription. 2. Verse. Section: A. Poems. B. Quatrains. C. Ghazals.Portrait of Faiz.c. 1975. Glossary of Urdu words in Roman script. "Faiz Ahmed Faiz (1911-1984) was one of the leading, if not the foremost, poet of the Indian subcontinent during the greater part of the last century. Listed four times for the Nobel prize of poetry, he was often compared to his friend Pablo Neruda, revolutionary poet and Nobel prize winner, of Chile. Of Faiz's multifaceted personality, which led him to become, amongst other things, an activist for human rights and liberties, a famous journalist and editor of literary magazines (Urdu and others), trade unionist, and film song writer, it is his poetry which will, not doubt, best survive the test of time. His very first volume of poetry, published in 1941 from Lucknow, brought him instant celebrity. "Naqsh-e-Faryadi" or "imprints" has since haunted more than one generation of Urdu lovers. Its combination of classical and elegant Indo-Persian diction with modern sentiment and sensibility still touches the heart of the reader. Apart from inventing the modern Urdu love poem, Faiz revolutionised the classical form of Urdu poetry, the Ghazal, giving it a powerful socio- political resonance. He used ancient forms of poetry, such as the Qawwali and the Geet, to convey his message of humanism without reference to caste,colour or creed. He suffered prison and exile for this in his homeland of Pakistan, where he was, for long years, denied access to the media. The 344 pp. Seller Inventory # 39488