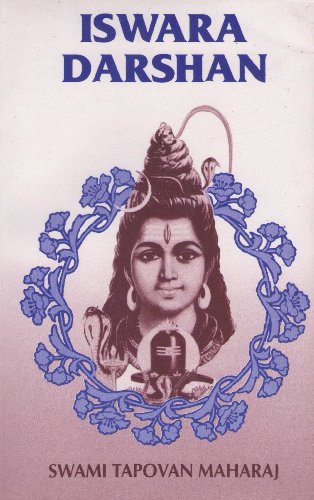 The book is the first instalment of the autobiography of Sri Swamiji Tapovanam.The author and subject of the book is a native of Kerala/india who exibited a yearning for renunciation and the leading of spiritual life.He tried the paths of public service through authorship of both Sanskrit and Malayalam jornalism and lectures.He visited every part of the country as a sadhaka visiting all important shrines .The voyage of spirit set forth here in the book Iswara Darshan makes very impressive reading unburdened by long compounds,free in use of verbs and free of any anxiety for ornamentation. His other book Wanderings In Himalayas is already a best seller on amazon site.

Swami Tapovan Maharaj (1889-1957) was a Hindu Sannyasi and Vedanta scholar who taught both Swami Chinmayananda, the founder of the Chinmaya Mission Movement and Swami Sundaranand. Born in Palakkad, Kerala as Subramanian Nair, Tapovan Maharaj exhibited a thirst for spiritual knowledge and self realisation, also being an accomplished public speaker. He left the modern education system early and dedicated himself to the study of Sanskrit and the Vedanta. After his brother became employed as a lawyer, he entered the order of Sannyasi. Tapovan Maharaj did not believe in the system of "ashrams", and was known for his strict solitary lifestyle in the Himalayan region of Uttarkashi. He authored two books on his travels through the Himalayas: "Wanderings in the Himalayas" (Himagiri Viharam) and "Kailasa Yatra." Tapovan Maharaj exhibited a deep love for nature and his accounts of his travels demonstrate such. His autobiography, written in Sanskrit is titled "Ishvara Darshana". He died in 1957. Swami Sundaranand is another well known disciple of Swami Tapovan Maharaj

Book Description CCMT 2007-01-01, 2007. Paperback. Condition: Very Good. Item is in very good condition. If supplemental codes/CDs for textbooks are required please contact us prior to purchasing as they may be missing. Seller Inventory # DS-8175973633-2