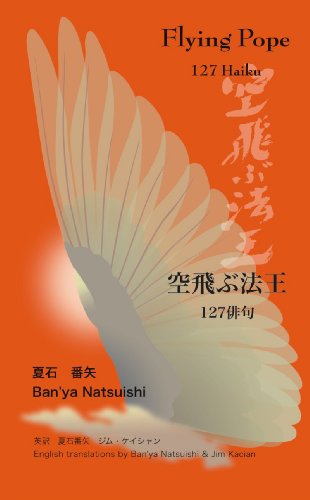 A gong sounds somewhere in the distance, and in the silence that ensues the reverberations of the collective conscience precipitate a collage of impressions that are at once familiar, and yet far beyond the accepted structures of perception. In this impressive collection of contemporary haiku, Ban'ya Natsuishi expertly challenges and coaxes the reader to join him in a flight of fancy - in and out of reality and illusion - not so unlike the great surrealist Salvador Dali. Both the reader and the flying pope take to the air, suspended above the Earth like an out-of-body experience ... observing from afar, and yet experiencing the dream-like state as if it were totally real - as a sort of dÃ©jÃ  vu recollection of the fringes between zazen and newspaper headlines ... or perhaps the CNN rolling news texts, floating across the bottom of the television screen. While it may be tempting to point out Natsuishi as l'Enfant terrible of contemporary haiku writing, his impudence is not intended to shock. It is, in fact, this sense of detachment in the author that binds together the childlike, the serious, the sarcastic, the humorous and the reflective - resulting in a splattering of surrealistic images that pose far more questions to the reader than give blatant commentary. Because of the masterly free flying construction, the reader is just as easily won over to the haiku of Ban'ya Natsuishi as he/she might be to adventuresome comic books and animated films. True enough, there is much observation embedded in these pearls of writing: sparkling semi-precious jewels singing, dancing, and jabbering now and then about such themes as politics, haiku writing without seasonal references, the loneliness of papal responsibility, and the burden of conscience. However, the real artistry of this work is perhaps the succession of painterly haiku frescoes, all variations on the same theme: the illusion of consciousness. Do read this book several times - forward and backwards, and even starting in the middle and proceeding in any direction ... sometimes dancing back and forth. There are many hidden levels within the poems, the silent connections in between the poems and in the work as a whole. - Adam Donaldson Powell, 2008 (based upon the English version of "Flying Pope").

Ban'ya Natsuishi which is the penname of Masayuki Inui, was born in Aioi City, Hyôgo Prefecture, Japan. He studied at Tokyo University where he received a Masters of Arts in Comparative Literature and Culture in 1981. In 1992 he was appointed Professor at Meiji University where he continues to teach. In 1993, he gave lectures at Jilin University in China, then was invited to haiku meeting in 1994 in Germany, in 1995 in Italy. From 1996 to 1998 a guest research fellow at Paris 7th University. In 1998 with Sayumi Kamakura, he founded international haiku quarterly "Ginyu", became its Publisher and Editor-in-Chief. In 2000, after attendance to Global Haiku Festival in USA, he co-founded the World Haiku Association, in Slovenia. Currently works as this association's Director. In 2001 attended to Vilenica Poetry Festival in Slovenia, in 2003 to Struga Poetry Evenings in Macedonia, in the same year worked as the Chairman of The Steering Committee for the 2nd World Haiku Association Conference which was held in Japan. In 2004 he was invited to Poetry at Porto Santo in Portugal. In 2005 he attended to the 3rd World Haiku Association Conference in Bulgaria, the 3rd Wellington International Poetry Festival and presided international haiku session of Euro-Japan Poetry Festival in Tokyo. In 2006 he was invited to Poetry Spring in Vilnius of Lithuania and attended to Ohrid P.E.N. Conference in Macedonia.