Items related to Allahabad: Where The Rivers Meet

Allahabad: Where The Rivers Meet 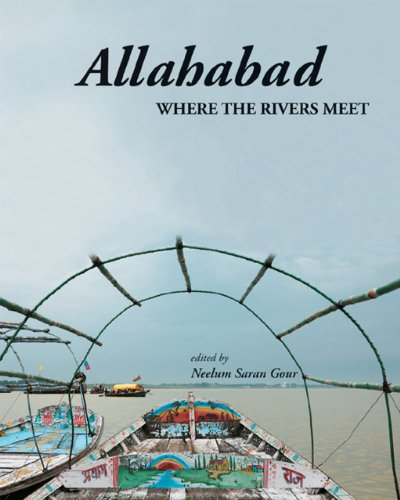 Explores the beautiful city of Allahabad

1. Allahabad: Where the Rivers Meet

2. Allahabad: Where the Rivers Meet (Hardcover)

Book Description Hardcover. Condition: New. Hardcover. Shipping may be from multiple locations in the US or from the UK, depending on stock availability. 180 pages. 1.361. Seller Inventory # 9788185026947

3. Allahabad: Where the Rivers Meet

5. Allahabad: Where the Rivers Meet

6. Allahabad: Where the Rivers Meet

Book Description Marg Publications, 2009. Hardcover. Condition: New. First edition. Allahabad, situated at the confluence of the rivers Ganga and Yamuna, possesses a unique cultural character among Indian cities. For centuries a spiritual metropolis for devout Hindus, it became a strategically positioned bastion of Mughal power and acquired a fine Islamic presence, overlaid by an equally elegant European profile as capital of the North-West Provinces of British India. A centre of high learning, Allahabad University produced generations of scholars, politicians, scientists, creative writers, bureaucrats, and jurists whose names belong to the roll-call of modern Indian history. Allahabad High Court was all too often the stage for the play of personalities and events of national resonance. Both during the Freedom Movement and the decades following independence, the city proved a significant energy centre for political action, producing five Prime Ministers and several political and cultural icons. Enlivened with many interesting and lesser-known details, the essays in this volume cover a comprehensive range of subjects: Allahabad`s mythological and popular narratives, its medieval architecture and painting, its legendary Hindi literary circles, its world of Persian and Urdu letters, the careful and aesthetic layout of the city by British town-planners and its imposing British ambience, the high-toned scholarship and civility of its academic fraternity and the dynamism of its legal community, the city`s centrality in the National Movement and in post-1947 Indian politics, and finally, its current shifting identity in democratically evolving times. For all those who know and love the city, and for those interested in modern Indian history and the tapestry of its interwoven cultures, this is an eminently readable and visually rewarding documentation of a high-profile city`s remembered and contemporary personality. Printed Pages: 180. Seller Inventory # 737BV

7. Allahabad: Where the Rivers Meet (Hardback)

8. Allahabad: Where the Rivers Meet (Hardcover)

Book Description Hardcover. Condition: New. Hardcover. Shipping may be from our Sydney, NSW warehouse or from our UK or US warehouse, depending on stock availability. 180 pages. 1.361. Seller Inventory # 9788185026947