Items related to Sri Bhakti Sandarbha (Volume 2) The Fifth Book of The... 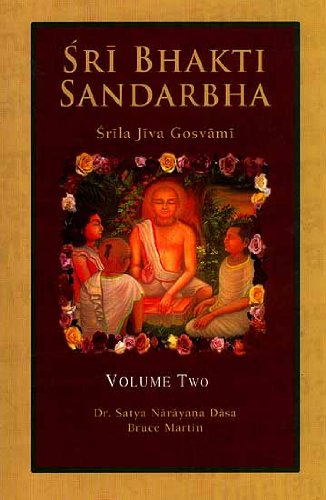 From The Jacket
Bhakti Sandarbha is the fifth book of the Six Sandarbhas. It offers a thorough analysis of Bhakti, or devotion, on the basis of Srimad Bhagavatam. Jiva Gosvami states that the Bhagavatam prescribes Bhakti as the most efficacious and universal process (abhidheya) for realizing the absolute. Bhakti has never been established as abhidheya so systematically and emphatically as in this book. Earlier Bhakti was generally considered as one among various spiritual processes. Including karma-yoga, jnana-yoga and Astanga-yoga. moreover it was usually regarded as a precursor to jnana, which ultimately leads to liberation. Rarely was Bhakti viewed as an independent process. In contrast to this. Jiva Gosvami asserts that Bhakti is the complete abhidheya, and as such all other processes become futile when bereft of devotion. Other practices have enduring significance only through contact with devotion. Even realization of Brahman is possible only by the grace of bhakti. Bhakti is the most blissful process both in practice and in perfection.
Dr. Satya Narayana Dasa earned his graduate degrees, B. Tech. & M. Tech. In engineering, from IIT Delhi, and worked as a software engineer in USA for a few years.
He gave up a promising career in this field to pursue the inner quest for truth. He studied Sanskrit and the six systems of Indian philosophy under various traditional Gurus in Vrndavana. He also studied the entire range of Gaudiya Vaisnava literature from his Guru. Sri Haridas Sastri. One of the eminent scholars and saints of India.
Dr. Satya Narayana Dasa (PhD. Sanskrit) founded Jiva Institute to promote Vedic culture, philosophy and Ayurveda through education. He regularly gives classes on Gaudiya Vaisnava literature and has authored many books on t