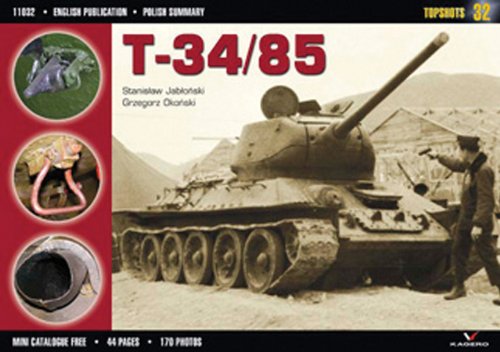 The T-34 medium tank is one of the most-produced and longest-lived tanks of all time.

Identification of T-34 variants can be complicated. Turret castings, superficial details, and equipment differed between factories. New features were added in the middle of production runs or retrofitted to older tanks. Damaged tanks were rebuilt, sometimes with the addition of newer-model equipment and even new turrets.

This album of detailed photographs is invaluable for the modeler or enthusiast alike.

About the Series
This is a classic series of highly illustrated books on the best machines of war, with several hundred photographs of each aircraft or vehicle. With close-up views of the key features of each machine, including its variations, markings and modifications, customizing and creating a model has never been easier. Includes extra features such as decals and masking foil.

“This is a great and useful reference book ... This is great for any postwar series T-34/85. I would definitely recommend everyone use the great pictures.” (IPMS/USA)

Book Description Kagero Oficyna Wydawnicza 2010-01-05, 2010. Paperback. Condition: Good. Item is in good condition. Some moderate creases and wear. This item may not come with CDs or additional parts including access codes for textbooks. Might be an ex-library copy and contain writing/highlighting. Seller Inventory # DS-8360445184-3