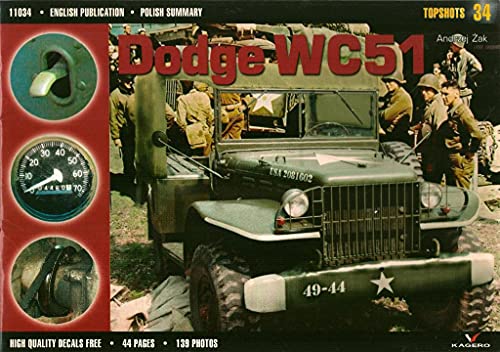 The Dodge WC series was a range of light military trucks produced by Dodge during WWII. The series included weapon carriers, telephone installation trucks, ambulances, reconnaissance vehicles, mobile workshops and command cars. They were replaced after the war by the Dodge M-series vehicles. WC was a Dodge model code: W for 1941 and C for half-ton rating. The C code was retained for the 3/4 ton and 1 1/2 ton 6x6 Dodges.

This book is an invaluable album of detailed photographs for the modeler.

About the Series
This is a classic series of highly illustrated books on the best machines of war, with several hundred photographs of each aircraft or vehicle. With close-up views of the key features of each machine, including its variations, markings and modifications, customizing and creating a model has never been easier. Includes extra features such as decals and masking foil.