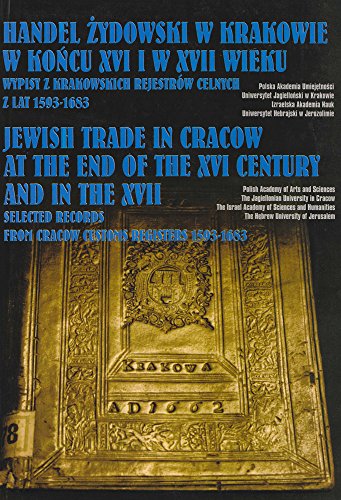 The initiative for publishing the sources regarding the history of the Jewish people in Cracow came from the Center for Research on the History and Culture of Polish Jews at the Hebrew University of Jerusalem. Discussions concerning the scope and character of the publication took place in Cracow during an international conference organized in September 1986. They were continued in Jerusalem, during another conference, which was held in February 1988. The work, supported by the Jerusalem Center, and particularly by the Hebrew University Professors Chone Shmeruk and Jacob Goldberg, and also by the Research Center on Jewish History and Culture in Poland of the Jagiellonian University, was carried out over several years. Professor Jan Malecki is responsible for the concept of this publication, as well as the introduction, the source text, and the index. Elzbieta Szlufik, M.A., selected the appropriate entries from the customs registers, and prepared the extracts. In this she also used the notes made available by Professor Janina Bieniarzowna. In the final stages Dr Krzysztof Pilarczyk was responsible for the appropriate editorial standard of the publication.