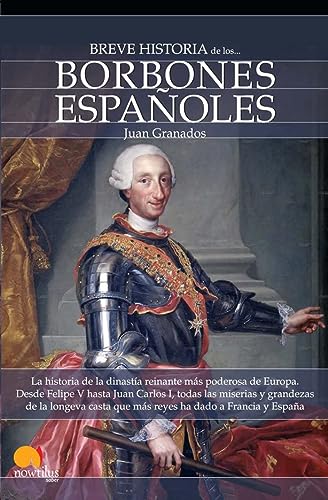 A Brief History of the House of Bourbon is a fascinating study of the most important and powerful dynasty in the history of Europe. It surveys the last three centuries in Spanish history: the deliriums of Philip V, the treachery of Fernando VII, and the keys behind the rule of Juan Carlos I.
The book offers a well-documented and attractive look at the long-living Bourbon dynasty and their successes, failures, and courageous moments, as well as the myths that surrounded them...A royal family that was as powerful as they were controversial.

Juan Granados (La CoruNa, 1961), has a degree in modern history from the University of Santiago de Compostela, and a degree in economic history from the Francesco Datini de Prato International Institute (Florence). His research work has focused on the Spanish ruling class of the 18th century. Through his work he has contributed articles to various media sources, including his standard column "El barril del amontillado" (The amontillado barrel) for the Sunday section of El Correo Gallego. He has written various books, including the non-fiction works, Historia ContemporAnea de EspaNa (1998) and Historia de Galicia (1999), and the novels, Sartine y el caballero del punto fijo (2003), El gran capitAn (2006) and Sartine y la guerra de los guaranIes (2010).