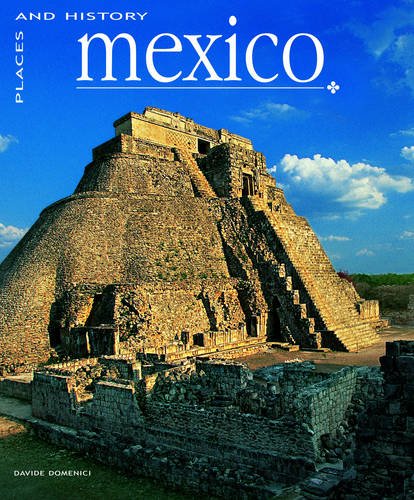 Mexico is one of the most extraordinary countries in the world, a land that has seen the longest-lasting and enigmatic civilizations of the new world be born and die, the place where history and nature are wonderfully enjoined offers itself unveiled to the gaze of the reader. Mexico, the great core-nation of Latin-ness in Central America and heir to ancient cultural traditions thousands of years old, features landscapes and moments of poignant beauty: wind-carved sierras, the transparent water of the Gulf of California and the Gulf of Mexico, and golden sands dominated by precipitous rock walls. Then, there are the chaotic streets of its immense capital, the flat roofs of the highland villages, deserts and sierras, cactus forests, charming, thousand-year-old archaeological sites, stepped pyramids and baroque palaces, and Indians and Hidalgos. It is a huge territory, almost 800,000 square miles big, in which peoples and ethnic groups that have changed history have followed one after the other: Olmecs, Toltecs, Mayans, Aztecs, Spanish conquistadors...Handy and complete, this book is the newest in the "Places and History" series that is in full colour.

Davide Domenici is an archaeologist specializing in Mesoamerica. He has headed the Río La Venta archaeological project in the Mexican state of Chiapas since 1997 and currently works at the faculty of paleography and medieval studies of the University of Bologna.

Book Description White Star 14/04/2005, 2005. Hardcover. Condition: Good. A lot of scratches on jacket and cover on back of book. Also some slight shelf wear on jacket and a tiny tear on outer edge of first page. Content is fine. Book. Seller Inventory # 062138-11

Book Description Gardners Books. Hardcover. Condition: Very Good. A copy that has been read, but remains in excellent condition. Pages are intact and are not marred by notes or highlighting, but may contain a neat previous owner name. The spine remains undamaged. At ThriftBooks, our motto is: Read More, Spend Less. Seller Inventory # G8854400637I4N00

Book Description Hardback. Condition: Very Good. The book has been read, but is in excellent condition. Pages are intact and not marred by notes or highlighting. The spine remains undamaged. Seller Inventory # GOR002711187