Items related to My Brother, Salvatore Giuliano: The True Story 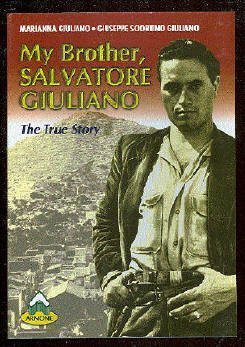 Giuliano's story begins with the allied invasion of Sicily in 1943, a time of great turmoil allegiances. One of World War II's most bizarre episodes was Operation Underworld. This was a secret alliance formed between American army intelligence officers and the Mafia kingpin, Charlie "Lucky" Luciano, so that the New York docks would be free of sabotage. In exchange, the Sicilian Mafia leaders would assist the Allied landings by providing intelligence information on Sicily. Luciano was released from prison and deported to Sicily. As agreed, American forces placed certain Mafia members who were loyal to Luciano in positions of power. Anyone who resisted the regime was either killed or imprisoned. The situation was desperate and it seemed that there was no one strong enough to stand against the evil that was engulfing the land. For some time, Giuliano had been waging his own war against the corruption by smuggling food into the area to feed his family and help the town's people of Montelebro. The police confiscated Salvatore's gram and tried to arrest him. He resisted and was shot twice in the back but killed an officer before he escaped into the hills. Now a hunted man, villagers flocked to the hills around Montelebro to join him. Salvatore Giuliano's resistance movement soon became a symbol of Sicily's desire to escape from the dominance of Italy and establish self-government. Political parties seeking autonomy for the island eagerly supported his cause, while politicians who opposed him devised a plot they felt would finally eliminate him.

Book Description Editrice AR.CO Palermo, 2000. Condition: Good. A+ Customer service! Satisfaction Guaranteed! Book is in Used-Good condition. Pages and cover are clean and intact. Used items may not include supplementary materials such as CDs or access codes. May show signs of minor shelf wear and contain limited notes and highlighting. Seller Inventory # 8887663157-2-4

Book Description Hushion House 2000-09-01, 2000. Paperback. Condition: Good. Item is in good condition. Some moderate creases and wear. This item may not come with CDs or additional parts including access codes for textbooks. Might be an ex-library copy and contain writing/highlighting. Photos are stock pictures and not of the actual item. Seller Inventory # DS-8887663157-3