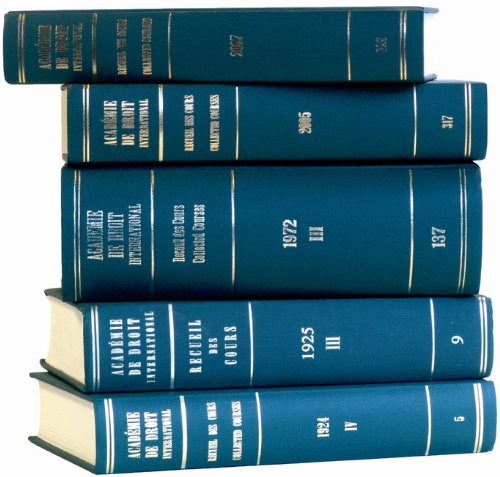 The 1969 Vienna Convention on the Law of Treaties 40 Years after, by Mark E. Villiger.The 1969 Vienna Convention on the Law of Treaties, regulating treaties between States, lies at the heart of international law. This course analyses how the Convention has been applied by States and tribunals in the past 40 years. Particular issues which are examined concern reservations to treaties, interpretation, jus cogens, breach of treaty, the procedural rules under the Convention and of course the Conventions relationship to customary international law. The Public International Law Regime Governing International Investment, by José E. Alvarez.This course considers the ramifications of the legal regime that governs transborder capital flows. This regime consists principally of a network of some 3,000 investment treaties, as well as a growing body of arbitral decisions. Professor Alvarez contends that the contemporary international investment regime should no longer be described as aspecies of territorial empire imposed by rich capital exporters on capital importers. He examines the evolution of investment treaties and investor-State jurisprudence constante and identifies the connections between these and general trends within public international law, including the increased resort to treaties (treatification), growing risks to the laws consistency (fragmentation), and the proliferation of forms of international adjudication (judicialization). Professor Alvarez also considers whether the regimes efforts to balance the needs of non-State investors and sovereigns ought to be characterized as global administrative law, as a form of constitutionalization, or as an increasingly human-rights-centred enterprise.

Co-publication with: The Hague Academy of International Law.