Items related to The Pragmatics of Interaction (Handbook of Pragmatics... 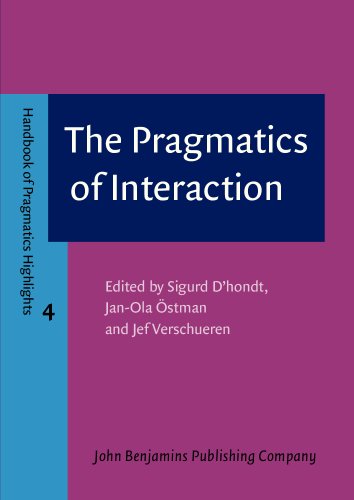 The ten volumes of Handbook of Pragmatics Highlights focus on the most salient topics in the field of pragmatics, thus dividing its wide interdisciplinary spectrum in a transparent and manageable way. While the other volumes select specific philosophical, cognitive, grammatical, social, cultural, variational, or discursive angles, this fourth volume is dedicated to the empirical investigation of the way human beings organize their interaction in natural environments and how they use talk for accomplishing actions and their contexts. Starting from Goffman’s observation that interaction exhibits a structure in its own right that cannot be reduced to the psychological properties of the individual nor to society, it contains a selection of articles documenting the various levels of interactional organization. In addition to treatments of basic concepts such as sequence, participation, prosody and style and some topical articles on phenomena like reported speech and listener response, it also includes overviews of specific traditions (conversation analysis, ethnomethodology) and articles on eminent authors (Goffman, Sacks) who had a formative influence on the field.

Shipping: US$ 10.40
From United Kingdom to U.S.A.
Destination, rates & speeds

2. Pragmatics of Interaction : : (Handbook of Pragmatics Highlights, No. 4)

3. The Pragmatics of Interaction