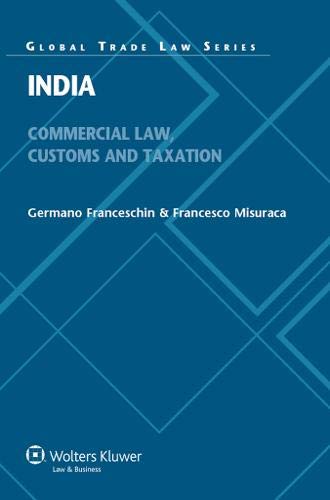 India, a Union of 28 States and 7 territories, with a population of over a billion people and multiple cultures and languages, is a democratic republic often called, quite rightly, "the largest democracy in the world". Because the well-established English legal system endured after independence in 1947, India categorically remains a common law jurisdiction, and its legal practice and procedure is conducted almost exclusively in English. Nonetheless, Indian law is sufficiently complex in ways that are distinct from other European-based systems that a book such as this--in which the business legal system of India is thoroughly reviewed--will be really welcomed by both practitioners and academics. This book examines the full spectrum of India's legal system as it applies to commercial, customs, and tax matters, and covers among much else such elements as the following:

An extensive appendix supplies texts of the Constitution of India, the Indian Penal Code and 23 Legislative Acts pertaining to commercial, customs and tax matters. There is a sample franchise agreement, and an informative summary of current and projected foreign trade policy through 2014. Both as a guide to business lawyers working with Indian partners and as a comparative law treatment of the world's second most populous country (and a rapidly growing economic powerhouse), this book has no peers.