Items related to Systems of Employee Representation at the Enterprise:...

Systems of Employee Representation at the Enterprise: A Comparative Study (Bulletin of Comparative Labour Relations Series) 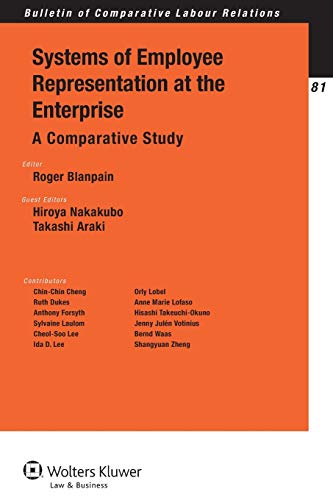 Amid the trend towards decentralized industrial relations, various new and modified systems of employee representation are taking hold in many countries worldwide. In this highly informative examination of this field of international labour law--originally presented as a series of papers for the 11th JILPT Comparative Labor Law Seminar held in Tokyo in February 2012--twelve distinguished scholars from Australia, China, France, Germany, Japan, Korea, Sweden, Taiwan, the United Kingdom, and the United States describe their countries--current perspectives on this issue, along with their own analysis and commentary.

Among the specific questions addressed for each jurisdiction are the following:

Given the need to secure representation for non-union and non-standard employees at the workplace, these reports on the conditions and new developments in this important field provide ample basis on which to build a better system of employee representation in this era of diversified workforces in the globalized market. Accordingly, this book will prove of inestimable value to practitioners and policymakers in labour and employment law anywhere in the world.

1. Systems of Employee Representation at the Enterprise: A Comparative Study (Bulletin of Comparative Labour Relations Series)