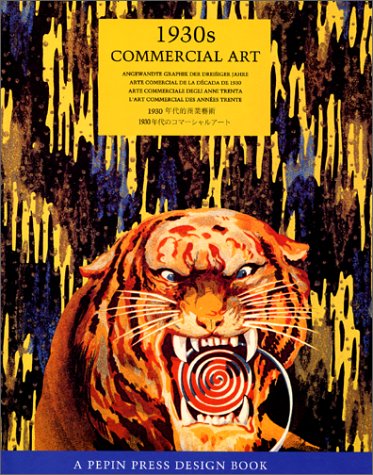 This volume presents a large selection of commercial illustrations and patterns from the 1930s. The focus is on designs which were painted or drawn, not on (typo)graphic composition. Although no specific decorative style was dominant in the period covered, many of the characteristics of the principal style of the 1920s, Art Deco, were still in evidence - notably Cubism and the manifestations of Oriental influences.
Modernity and originality were key principles in 1930s commercial art, and this accounts for those instances where heavy ornamentation was replaced by a bold gesture of form and colour, or by a geometric pattern. However, as opposed as they may have been to the European decorative tradition, Modernists were often interested in ethnic or folk designs, and these can be discerned in several examples shown in this book. Furthermore, avant-garde expressions were not to everybody's taste, and traditional designs continued to be popular. Especially in wallpaper designs, many people favoured baroque and floral compositions. Still, even in these traditional designs, contemporary concepts are to be seen.