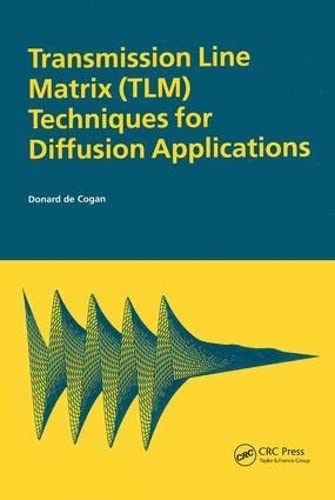 Transmission Line Matrix (TLM) is a numerical technique which is based upon establishing an analogue between a space and time dependent physical problem and an electrical network which includes transmission lines. By their very nature these enforce time discretization on the network which can then be solved explicitly in the time-domain.
Although it is best known in electromagnetic applications, TLM can also be used to model diffusion phenomena, and this book outlines the state of the art in this area.
The first part of the book deals with theory and techniques. The second part is devoted to the development of algorithms for specific applications. This is arranged as a historical sequence starting with heat-flow and matter diffusion. The remainder of the book outlines many of the ingenious exploitations of the unique properties of TLM, including topics such as the solution of convection, Poisson, Laplace, and time-dependent Schrodinger equations. Applications in the firing of ceramics, chromatography, image processing, and the solution of inverse thermal problems are also covered.