Items related to Cold Economic Warfare: CoCom and the Forging of Strategic... 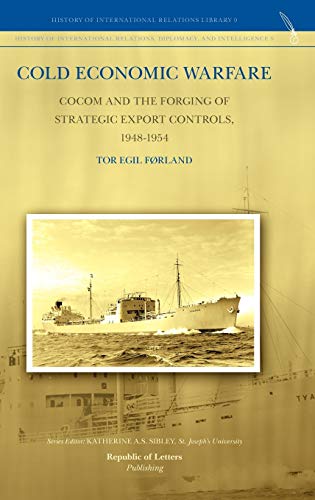 History of International Relations, Diplomacy and Intelligence, 9 (History of International Relations Library, 9) One of the least known aspects of the Cold War is the Western strategic embargo of the Soviet bloc. On U.S. initiative a Coordinating Committee (CoCom) was established in 1949-50, with the aim of preventing exports to Eastern Europe of goods that might benefit Soviet bloc war potential. The United States wanted a more comprehensive embargo than its West European allies. After the outbreak of war in Korea, pressure from Congress and the Commerce Department led to an expansion of the CoCom lists. Throwing new light on intra-alliance policy-making, this book explores the creation of CoCom and the widening of the controls as well as the attempts by Britain to scale down the embargo after the end of the Korean War. Table of Contents Acknowledgments Abbreviations Description of Export Control Lists Timeline of Strategic Export Controls 1 Introduction CONSTRUCTION, 1948-1950 2 The American Initiative 3 The European Reaction 4 The Creation of CoCom CONFRONTATION, 1950 5 A Fundamental Policy Difference 6 The Internal U.S. Dispute CONVERSION, 1950-1951 7 Home Fronts and Tripartite Negotiations 8 U.S. Disputes and London Negotiations Revisited CONSOLIDATION, 1951-1953 9 CoCom and the Congress 10 Expansion 11 Export Controls in Practice CONTRACTION, 1953-1954 12 Eisenhower and the Long Haul 13 Churchill and the Short List 14 Trying to Hold Back Niagara Falls 15 Conclusion BIBLIOGRAPHY INDEX About the Author(s)/Editor(s) Tor Egil Fřrland, dr. philos. (1991), is Professor of History at the University of Oslo. He has published books and articles in leading international journals on strategic export control history, the radicalization of the 1960s, and methodology.