2009 MODU Code 2010: Code for the Construction and Equipment of Mobile Offshore Drilling Units, 2009 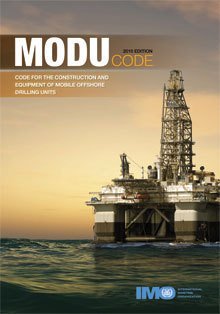 The Assembly, at its twenty-sixth session (23 November to 2 December 2009), adopted by resolution A.1023(26) the Code for the Construction and Equipment of Mobile Offshore Drilling Units, 2009 (2009 MODU Code), which had been developed following a thorough revision of the 1989 MODU Code adopted by resolution A.649(16). In adopting the 2009 MODU Code, the Assembly recalled in particular that, since the adoption of the 1989 MODU Code, the Organization had adopted a significant number of amendments to many of the regulations of the International Convention for the Safety of Life at Sea, 1974 (SOLAS) referenced in the Code, and also that the International Civil Aviation Organization (ICAO) had adopted amendments to the Convention on International Civil Aviation which impacted on the provisions for helicopter facilities as contained in the Code. The 2009 MODU Code provides an international standard for MODUs of new construction which will facilitate their international movement and operation and ensure a level of safety for such units and for personnel on board, equivalent to that required by the 1974 SOLAS Convention and the Protocol of 1988 relating to the International Convention on Load Lines, 1966, for conventional ships engaged on international voyages. The 2009 MODU Code supersedes the 1989 MODU Code for mobile offshore drilling units, the keels of which are laid or which are at a similar stage of construction on or after 1 January 2012. For MODUs constructed before that date, the provisions of the 1989 MODU Code still apply.