Items related to Harmonic Analysis (Texts and Readings in Mathematics) 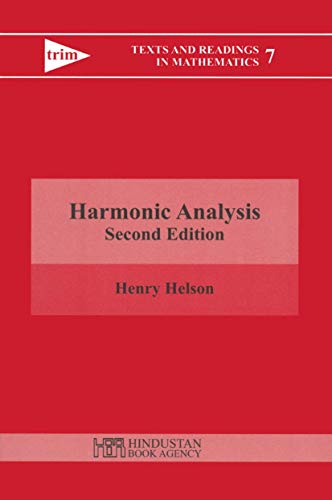 This second edition has been enlarged and considerably rewritten. Among the new topics are infinite product spaces with applications to probability, disintegration of measures on product spaces, positive definite functions on the line, and additional information about Weyl's theorems on equidistribution. Topics that have continued from the first edition include Minkowski's theorem, measures with bounded powers, idempotent measures, spectral sets of bounded functions and a theorem of Szego, and the Wiener Tauberian theorem. Readers of the book should have studied the Lebesgue integral, the elementary theory of analytic and harmonic functions, and the basic theory of Banach spaces. The treatment is classical and as simple as possible. This is an instructional book, not a treatise. Mathematics students interested in analysis will find here what they need to know about Fourier analysis. Physicists and others can use the book as a reference for more advanced topics.