Items related to First Draft: Witness to the Making of Modern India

First Draft: Witness to the Making of Modern India 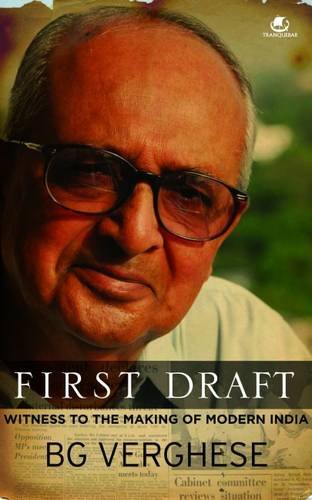 He was privileged to watch the creation of modern India from a ringside seat as a political and development correspondent, editor and columnist in the country s leading newspapers and journals. In between he had two stints in Government and was a member of committees and commissions that inquired into a number of seminal issues. The narrative of family and youth tell us something of the India that was. Thereafter, his worm s eye view takes us through the unpacking of the Constitution through legislation and planning, the efforts to build socialism under a permit-licence raj and control of the commanding heights of the economy, the end of single-party Congress dominance leading to a new coalition era with the rise of subaltern classes, the transition from famine to green revolution, the reform era and the unshackling of the economy to usher in a new growth path and an Emerging and Incredible India, both shining and, alas, still grievously suffering. Statesmen, heroes, villains and upstarts walk through the pages. There is the story of non-alignment and security concerns, of war and peace, the reshaping of foreign relations and security parameters and efforts at domestic reconciliation in J&K, the North-east and, now, coping with the discontents and inequities that have led to Maoism.Verghese spent five years outside the mainstream with the Gandhi Peace Foundation of experience how the other half lives.His is not an armchair view but a truly hands-on-story. He believes that a n inclusive social base of Fraternity and equal opportunity holds the key to winning the future. Though not a history of India as such, the sweep of this volume, written with zest and humour, fills a gap in India's post-Independence history.

Born in Maymyo (Burma) in 1927, and educated at Delhi and Cambridge Universities, B.G. Verghese began his career as a journalist with the Times of India in 1949. The next 60 years saw the unfolding of a varied career as Editor, Hindustan Times (1969-75) and the Indian Express (1982-86), Information Adviser to the PM (1966-68), Information Consultant to the Defence Minister (2001); Member National Security Advisory Board (1998-2000) and of the Kargil Review Committee (1999). He has served on several commissions, committees (water resources, the North-east, broadcasting, etc) and boards and has been associated with numerous NGOs and educational institutions. He is a founder member of the Editor s Guild of India. He received the Magsaysay Award for Journalism in 1975 and Assam s Sankaradeva Award in 2005. His previous books include Waters of Hope, India's North-east Resurgent, Warrior of the Fourth Estate(on Ramnath Goenka), and Rage, Reconciliation, Security:Managing India's Diversities. B.G. Verghes is currently visiting professor at the Center for Policy Research, Chairman, Commonwealth Human Rights Initiative and Fellow, ASCI, Hyderabad.

1. First Draft: Witness to the Making of Modern India (Hardback)

2. First Draft: Witness to the Making of Modern India (Hardback)