Items related to The Inside Story of Jammu & Kashmir State

S. P. Bakshi The Inside Story of Jammu & Kashmir State

The Inside Story of Jammu & Kashmir State 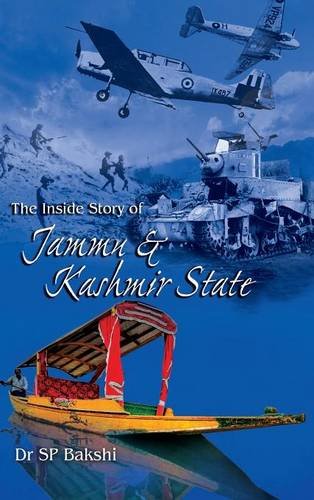 This is a unique and path breaking book about the invasion and accession of the J&K state to India and its aftermath. The author, who was the Chief Education Officer of the J&K State Forces in Maharaja Hari Singh's times, was very well placed to watch history unfolding. He was very close to the Royal family and has, for the first time , provided some radical new inputs and insights into that exciting period. He has highlighted the Role of a Rasputin like Monk called MahantJi, who had begun to wield inordinate influence on the Maharaja. He filled his head with delusions of grandeur, and prevailed upon him to stay independent and accede neither to India or Pakistan. This prompted Pakistan to muster thousands of Tribal raiders and mount a brutal invasion of the J&K state. The tribesmen were recruited on the simple promise of loot and rape and they set the kingdom to fire and sword. This was a rather strange way of "liberating" the shocked people of the state. The heavily outnumbered State Forces fought heroically to save the state but the odds were simply overwhelming. After the war, the author was asked to compile the official history of the State Forces role in that conflict. In this book he recounts the grim and riveting saga of how the outnumbered state forces fought a tenacious battle to save the state. Finally Brig Rajinder Singh, the Chief of staff of the State Forces, personally sallied forth with a handful of men to stop the Raiders march on to Srinagar. He blew up the strategic Uri Bridge and held the Tribals off for three crucial days which enabled the Indian Army to fly in and save the valley. The subsequent exploits of the Indian Army liberated two - thirds of the state and completely overshadowed the heroic role of the state Forces. This book gives a first person account of that grim battle against impossible odds. The author provides a unique, personal and firsthand account of an historic era and of the issue of accession that has become a subject of so much controversy and conflict. It is amazing that this brutal tribal invasion orchestrated by Pakistan has today been completely erased from the minds of the people of Kashmir by Jihadi propagandists. They need to revisit that shocking period to understand that Pakistan has no love lost for the people of Kashmir and covets only the river waters of the state. It recounts the horrors of rape and massacre that Pakistan had visited upon the hapless people of J&K. This book is a must read for all scholars, statesmen and soldiers dealing with the nettlesome subject of Kashmir. The riveting first person account would equally interest the layman and documents a vital period of our nation's history.

1. The Inside Story of Jammu & Kashmir State

2. The Inside Story of Jammu & Kashmir State