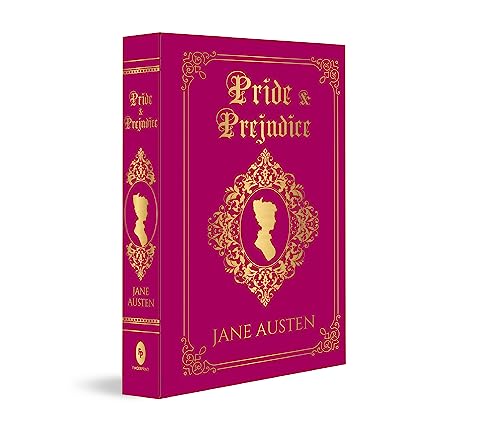 This collectable edition is beautifully crafted and designed. Perfect for gifting as well as for keeps. A prized edition for any library. When Elizabeth Bennet meets Fitzwilliam Darcy for the first time at a ball, she writes him off as an arrogant and obnoxious man. He not only acts like an insufferable snob, but she also overhears him rejecting the very idea of asking her for a dance! As life pits them against each other again and again, Darcy begins to fall for Elizabeth's wit and intelligence and Elizabeth begins to question her feelings about Darcy. But when Darcy saves her youngest sister Lydia from a scandal, Elizabeth starts to wonder if her pride has prejudiced her opinion of Darcy. Through this tale about two warring hearts, Jane Austen weaves a witty satire about life in eighteenth century England. And though it was published more than two centuries ago, Pride and Prejudice continues to enthrall readers to this very day. A beautiful classic leather-bound edition, this book is perfect as keepsake.

Jane Austen is one of the most well-known and widely-read English novelists of all time. She was born on December 16, 1775, at the rectory in the village of Steventon, in Hampshire, England. Jane s fascination with words and with the world of stories, began quite early. In the 1790s, during her adolescence, she started writing her own novels, the first one being Love and Freindship [sic] a parody of romantic fiction organized as a series of love letters. Between 1811 and 1816, Jane started to anonymously publish her works. Sense and Sensibility, Pride and Prejudice, Mansfield Park and Emma were all published during this time. Jane started working on Persuasion, her last completed novel, soon after she finished Emma. Written in her unique and distinctive style, it subtly exposes the rapidly changing and expanding social environment of the nineteenth century England. Completed in 1816, it was published posthumously in December 1817. In 1816, at the age of forty-one, Jane became ill with Addison s disease. She died on July 18, 1817.