Items related to In A Nutshell: Karma and Rebirth (In a Nutshell (Naxos...

Jinananda In A Nutshell: Karma and Rebirth (In a Nutshell (Naxos Audio))

In A Nutshell: Karma and Rebirth (In a Nutshell (Naxos Audio)) 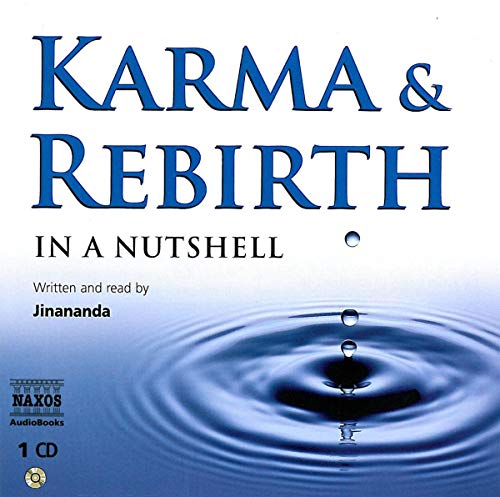 Naxos AudioBooks launches a new 1 CD introductory series "In a Nutshell" beginning with "Karma and Rebirth". Buddhist teacher and writer Jinananda considers the history, the tradition and the more contemporary view on Karma and Rebirth in this controversial and largely misunderstood topic. The "In a Nutshell" series will see a regular release pattern in the coming months on a broad range of subjects covering history, science, religion and philosophy, and offering concise pertinent introductions.

While the concepts of rebirth and some version of karma are found in many cultures, this short, informative recording focuses primarily on the Buddhist tradition. Jinananda explains how karma works and, more importantly, why misfortunes in this life do not necessarily imply wicked acts in a past life. Particularly fascinating are the remarkable recorded accounts of memories being transferred from dying men to small children half a country away. Jinananda is an excellent reader of his own work. He is clearly invested in the text, and his calm, intelligent tone makes the sometimes-mind-bending theories perfectly clear. This is a well-executed introduction to the Buddhist tradition of karma. At the very least, it will get listeners thinking. A.H.A. © AudioFile 2010, Portland, Maine

Close attention to this study of the theory and practice (well, theory mainly, obviously) of rebirth will open your mind to the fundamental mysteries of human existence. Though covering many religions and traditions, its overall viewpoint is Buddhist and the central concept of karma - that ethical or unethical choices of action have consequences now and in future lives - might lead to a helpful re-examination of one's behaviour. No easy answers here, but confirmation that existence is necessarily impermanent and unsatisfactory. - Karen Robinson, The Sunday Times This is a scholarly yet accessible introduction to the spiritual theory often called "reincarnation." The author, born Duncan Steen in 1952 in Great Britain, became a Buddhist in 1986. He is the author of several books on Buddhism. The introduction makes clear that the topic is not a simple one, with a history of debatable nuances among believers of various, Eastern traditions. Jinananda makes clear he is speaking from the Buddhist tradition, and that the various Buddhist traditions are somewhat splintered on the subject. He begins with research from a University of Virginia professor which details accounts of children and adults across the globe who have seemingly remembered past lives. This includes the phenomena of children exhibiting mastery of foreign languages not logically available to them and knowledge of verifiable facts of history they could not know. He then delves into the subjects of Karma, Tibetan Buddhist cosmology, and other aspects of the subject. His grasp is broad and his enthusiasm for the subject apparent. He reads in a calm, unaffected manner. This is an excellent resource for those interested in the subject. - Nancy Chaplin, SoundCommentary.com

1. In A Nutshell: Karma and Rebirth (In a Nutshell (Naxos Audio))

Book Description Naxos AudioBooks, 2009. Audio CD. Condition: Good. Connecting readers with great books since 1972. Used books may not include companion materials, some shelf wear, may contain highlighting/notes, may not include cdrom or access codes. Customer service is our top priority!. Seller Inventory # S_237732918