Items related to From Solidarity to Martial Law: The Polish Crisis of... 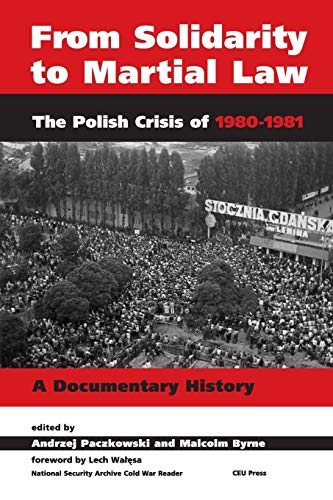 96 documents on 16 months between August 1980 when the Solidarity trade union was founded and December 1981 when Polish authorities declared martial law and crushed the nationwide opposition movement that had grown up around the union. Transcripts of Soviet and Polish Politburo meetings give a detailed picture of the goals, motivations and deliberations of the leaders of these countries. Records of Warsaw Pact gatherings, notes of bilateral sessions of the communist camp provide additional pieces to the puzzle of what Moscow and its allies had in mind.

Andrzej Paczkowski is Professor at the Institute for Political Studies, Polish Academy of Sciences, Warsaw, where he also is a member of the Board of the Institute of National Remembrance. He serves as editor of Intermarium: An Online Journal of East Central European Postwar History and on the editorial board of the Harvard Project on Cold War Studies. He co-authored, with Stephane Courtois, Nicolas Werth, Jean-Louis Panne, Karel Bartosek, and Jean-Louis Margolin, The Black Book of Communism: Crimes, Terror, Repression (1999).

3. From Solidarity to Martial Law: The Polish Crisis of 19801981; A Documentary History (Paperback)