Items related to Israel's Rights as a Nation-State in International...

Israel's Rights as a Nation-State in International Diplomacy 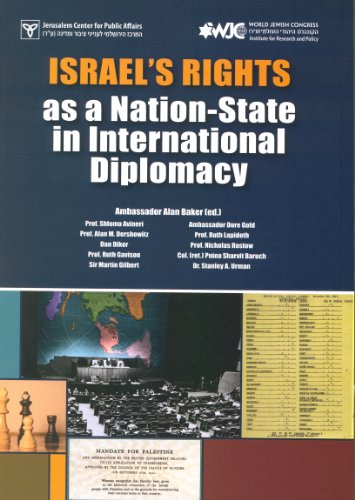 A concerted campaign is being waged against Israel to question its very legitimacy in virtually every aspect of its historical, political, and cultural life, with the aim of undermining the very foundations of Israel's existence.

In response, several world-renowned experts have joined to present an authoritative exposition of Israel's Rights as a Nation-State in International Diplomacy.

This report explains clearly why the Jewish people deserve a state of their own and refutes all the major claims against Israel's rights.

Ambassador Alan Baker, director of the Institute for Contemporary Affairs at the Jerusalem Center for Public Affairs, is one of Israel's leading international law experts. He served as the legal adviser and deputy director-general of the Israel Foreign Ministry from 1996 to 2004, followed by four years (2004-2008) as Israel's ambassador to Canada.

Amb. Dore Gold, president of the Jerusalem Center for Public Affairs, served as Israel's ambassador to the United Nations (1997-1999). Dr. Gold is the author of Hatred's Kingdom: How Saudi Arabia Supports the New Global Terrorism; Tower of Babble: How the United Nations Has Fueled Global Chaos; The Fight for Jerusalem: Radical Islam, the West, and the Future of the Holy City; and The Rise of Nuclear Iran: How Tehran Defies the West.

1. Israel's Rights as a Nation-State in International Diplomacy