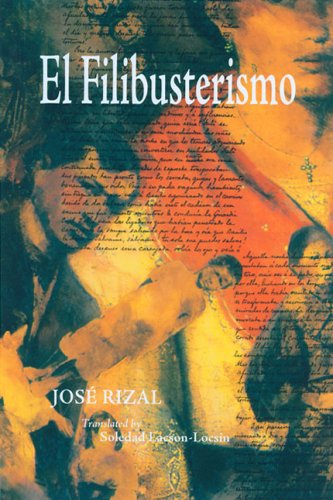 The Book, El Filibusterismo (Subversion) is the second nvel by José Rizal, national hero of the Philippines. Written as a sequel to the Noli Me Tangere, it was begun after the author returned to Europe in 1888, was published in Ghent in 1891, then shipped to Hong Kong, where many copies were confiscated by authorities who by then had realized the impact of Rizal's writings on his people. It was serialized in El nuevo regimen in Madrid in 1891, then later translated into English, German, French, Japanese, Tagalog, Ilonggo and other foreign and local languages. The Fili calls back to life some of the characters of the Noli -- Basilio, Dońa Victorina, Padre Salvi - and builds a background on the lives of the others -- Capitan Tiago, Maria Clara, Ibarra. It introduces new members who enrich the cast of the PHilippine historical fiction: Simoun, the transformed Ibarra; Cabesang Tales and his struggle for justice; the nationalist student Isagani; the Indio Priest Padre Florentino; friars, officials, lawyers, journalists. Through them the colonial milieu was expanded-- its officialdom, education, legal system, power plays, social patterns--and seen anew as context for conflict and insight. To this translation, Soledad Lacson-Locsin has restored the original dedication "Al pueblo Filipino y su Gobierno" which was not from the printed edition, in order to heighten the change she saw from the softer emotions of the Noli to anger and passion of the Fili.