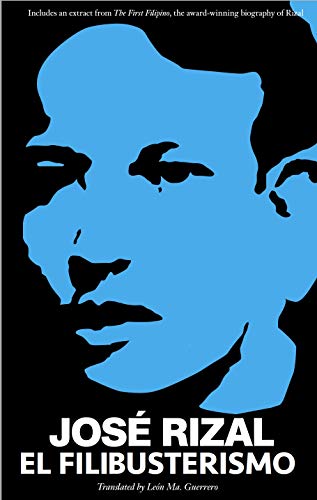 Few novels have made a more shattering impact on their society than the Noli Me Tangere and El Filibusterismo: Subversion: A Sequel to Noli Me Tangere of Jose Rizal. And surely no writer paid a higher penalty for self-expression; Rizal was executed by a firing squad mainly because of these two books.

Filipinos, inspired by Rizal, made the first nationalist revolution in Asia in 1896, established its first democratic republic, which survived until 1901, and in 1946, exactly half a century after Rizal's execution, became the first Asians to win independence from Western colonialism. It is not mere patriotic pride that leads Filipinos to acclaim the author of the Noli and the Fili as the first Asian Nationalist and as one who in his way moved the world.

Jose Protasio Rizal Mercado y Alonso Realonda (June 19, 1861 December 30, 1896, Bagumbayan), was a Filipino polymath, nationalist and the pre-eminent advocate for reforms in the Philippines during the Spanish colonial era.

Rizal's 1896 military trial and execution made him a martyr of the Philippine Revolution. He is widely considered the greatest Filipino hero and a de facto national hero. The anniversary of Rizal's death is commemorated as a holiday.

The seventh of eleven children born to a wealthy family, Rizal attended the Ateneo Municipal de Manila, earning a Bachelor of Arts. He enrolled in Medicine and Philosophy and Letters at the University of Santo Tomas and then traveled to Madrid, Spain, where he continued his studies at the Universidad Central de Madrid, earning the degree of Licentiate in Medicine.

He attended the University of Paris and earned a second doctorate at the University of Heidelberg. Rizal was a polyglot conversant in at least ten languages. He was a poet, essayist and novelist whose most famous works were his two novels, Noli me Tangere and El Filibusterismo. These are social commentaries on the Philippines that formed the nucleus of literature that inspired dissent among peaceful reformists and spurred the militancy of armed revolutionaries against the Spanish regime.

As a political figure, Rizal was the founder of La Liga Filipina, a civic organization calling for reforms in Spanish colonial rule. A founding member, Andres Bonifacio, set up the secret society Katipunan, which instead worked for the independence of the Philippines through armed revolt. While Rizal was definitely a proponent of institutional reforms by peaceful means, the extent to which he was in favor of violent means is debated by Rizal scholars. The general consensus, however, considers his political activities and execution by the government as major inspirations of the Philippine Revolution, led by Bonifacio and later Emilio Aguinaldo.

The theme of the Fili is what would now be called colonialism. It asks the questions that are still being asked today. Does a 'civilizing mission' justify the permanent subjection of one race to another? Should the colony aim at 'assimilation' with the metropolis or independence? If independence should it be achieved through the process of peaceful evolution or by force of arms? All in all, it is a lucid and fresh translation. The gas light and romance of the nineteenth century are missing, but communication to the contemporary reader may be the better for it. --Alfredo R. Roces, The Manila Times.