Items related to On the Edge of History

Abdo, Joseph C. On the Edge of History

On the Edge of History 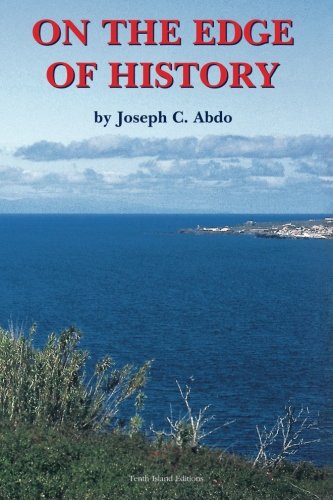 Set in the mid-Atlantic island of Fayal, Azores, this is a 19th-century microcosm of America before it became a super power. This book covers three generations of the Dabney family as they discover and define their new duties as U.S. Consuls businessmen, and representatives of our country in the mid-19th century.

Joseph C. Abdo, who prefers to be called Joe, is an American who has been living in Portugal since 1984. After a long career in health care planning and administration in California, he took a mid-life break and became an apprentice in a Portuguese ceramic tile painting factory. Although his original intent was to stay 6 months, he found the country, its people and the lifestyle to his liking and found a job teaching English as a foreign language to enable him to stay a while longer. This has turned out to be a long while and led to involvement in a variety of activities. His interest in writing evolved from articles to books after noting that the century-old electric trams in Lisbon attracted many tourists. As a result he wrote "Tram Tours of Lisbon", which described the places of interest along the tram routes. Joe then started on a book describing walking tours in Lisbon. During a vacation to the Azores, Joe came across a reference to the Dabney family from Boston in a tourist brochure on the island of Faial. However, there was little information about this family that provided three generations of American Consuls to the Azores in the 19th century and he decided to tell the story of this important but unknown American family in the book "On the Edge of History". Joe Abdo also published "The Quiet Radical," the biography of Samuel Longfellow, youngest brother of Henry Wadsworth Longfellow. He was influential in the more radical social and religious movements of the 19th century. Currently he is working on the story of Portuguese Jesuit Padre Antonio de Andrade, first European to cross the Himalayas to Tsaparang in the kingdom of Guge in western Tibet. He established a mission there that only functioned for 14 years and closed not long after the conquest of Guge by the neighboring kingdom of Ladakh, partly to stop the Christian influence.

1. On the Edge of History