Items related to Ying-Yai Sheng-Lang: Overall Survey of the Ocean's... 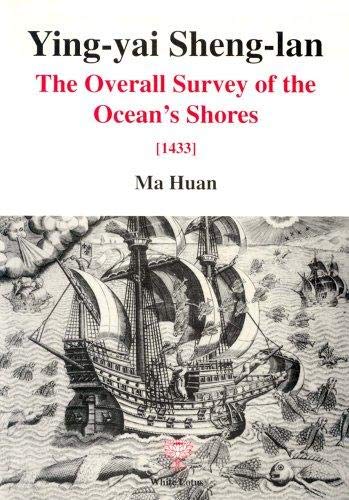 Ma Huan's descriptions are based on personal observation of twenty countries from Champa (Central Vietnam) in the East to Mecca in the West. Ma Huan was the Muslim interpreter of the famous Cheng Ho, commander of the Chinese Fleet. Of the sources for the history of southern Asia during the 15th century, the Chinese authorities are the most rewarding, and of these the most informative and interesting is Ma Huan. The 15th century was the heroic age of Chinese naval expansion; four Chinese fleets traversed the Indian Ocean simultaneously, and flotillas explored 'the four seas' from southern Africa to Timor. The imperial court was thronged with royal visitors or envoys from 70 foreign countries from Japan to Hormuz, and Chinese manufactures were sought after in the markets of Asia from Majapahit to Baghdad. This new translation is based on the definitive text established by the eminent Chinese scholar Feng Ch'eng-Chun and first published in 1935. Mr. Mills' introduction contains accounts of Cheng Ho's expeditions and Ma Huan's book. Eight appendices treat peripheral topics, mainly geographical and nautical; a gazetteer records the names of some 700 places known to the Chinese when their golden age of exploration ended in 1433; with the aid of printed and manuscript sailing directions, an attempt is made to explain about 600 names and legends in the remarkable maritime cartogram ('Mao K'un Map') published in the Wu Pei Chih, and to trace the stages of voyages made, inter alia, through the Singapore Strait, from Sumatra to Ceylon (Pieh-lo-li, Beruwala), and from Malacca to China. This text obtains new significance for what is not in it: this classic Chinese text shows no historical evidence to support Chinese claims to the Spratlys.