Items related to Faces of the Unreached in Laos: Southeast Asia's...

Faces of the Unreached in Laos: Southeast Asia's Forgotten Nation 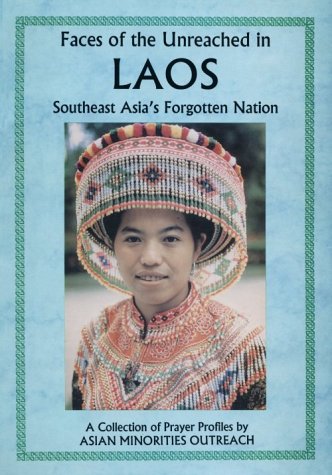 'Faces of the Unreached in Laos' profiles 138 distinct ethno-linguistic people groups in Laos. Each profile contains pertinent cultural and historical information for each group, including a map and photograph of people in traditional dress. Superb full-color photographs are included throughout the book.

Non-Christian readers need to be aware that 'Faces of the Unreached in Laos' is a prayer guide intended for use by Christians and missionary agencies interested in Laos.

For centuries land-locked Laos has been the forgotten nation of Southeast Asia: forgotten by politicians, explorers and missionaries alike. AMO presents this new book to people around the world in a bid to raise awareness and outreach to the needy 138 people groups of Laos. This is the first known book to profile ALL the peoples of Laos.

Laos is one of the neediest, most ethnically diverse, and most strategic countries of the 10/40 window, but because of its relatively small population and Communist government few organizations consider Laos a priority.

'Faces of the Unreached in Laos' makes an excellent guide for individuals, groups, and organizations interesting in helping the poorest of the poor, or even if you are just interested in the thicket of ethnic groups and tribes in the fascinating nation of Laos. Each page has pertinent cultural and historical information of each group, plus maps and photographs. A number of superb full-color photographs are also included in the book. It is not a question of IS this the best book available on the various peoples of Laos, it is the ONLY ever publication to contain such thorough research. It makes an ideal souvenir for travelers, a vital guide for scholars, and a handbook for the adventurous.

Asian Minorities Outreach is a non-profit community development organization that works in the restricted countries of Asia among unreached tribes and ethnic groups.

1. Faces of the Unreached in Laos Southeast Asia's Forgotten Nation

2. Faces of the Unreached in Laos: Southeast Asia's Forgotten Nation

Book Description Asian Minorities Outreach, U.S.A., 1999. Soft cover. Condition: Very Good. Asian Minorities Outreach, 1999-07-22. Paperback. Very good condition with bottom front corner bent and creased. Several page folds. Out of Print. 1999. Asian Minorities Outreach 9748530272 US No printing history. When published, LAOS existed as a land-locked nation of about 5.2 million people, which developed at a slower pace than its neighbors. Ethnographic and anthropological materials on Laos are scarce. Within Laos, over 130 different ethnic / language groups of people exist. it is hard to identify the groups and learn their languages. Their people often cannot converse with one another. This is believed to be the first book ever written on ALL the people groups of LAOS. There are so many distinct groups in one small country. This is a Christian based book, which was compiled to fill the great need among outreach ministries in LAOS. This book is hard to find and normally lists for more than $100 when available. Seller Inventory # 002746