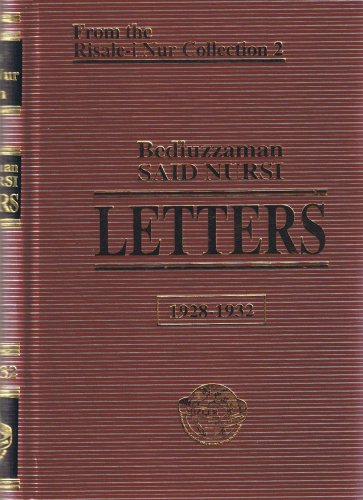 Largely replying to questions put by Bediuzzaman s students, these Letters cover a wide range of subjects: they provide illuminating answers to many questions of belief and Islam; they contain brilliant and unique explanations of the truths of belief and mysteries of the Qur'an, which also illustrate the Qur'anic way of Knowledge of God opened up by the Risale-i Nur; they offer important guidance to contemporary Muslims concerning many questions ranging from nationalism to Sufism; they also throw light on Bediuzzaman's own life in those years of exile and the conditions during the early years of the Turkish Republic; in addition they include the celebrated Nineteenth Letter, which describes more than three hundred of the Miracles of Muhammad (PBUH); the Twentieth Letter, which together with being an important lesson in reading the Book of the Universe, provides extremely powerful proofs of Divine Unity; and the Twenty-Fourth Letter, which solves convincingly the mystery of the constant activity in the universe, and the change and renewal of beings.

Bediuzzaman Said Nursi was born a century ago, in 1873, in a village in eastern Anatolia, Nurs, from which he received the name Nursi. He received his basic education from the best-known scholars of the district. The extraordinary intelligence and capability of learning that he showed at a very early age made him popular with his teachers, colleagues and the people. When he was sixteen years old, he silenced the distinguished scholars who had invited him to a debate (debate was then a popular practice among scholars). This later recurred several more times with various groups of scholars, and he thereby began to be called Bediuzzaman (Wonder of the Age). The time he spent in education paved the way in his mind for the thought that at a time when the world was entering a new and different age, where science and logic would prevail, the classical educational system of theology would not be sufficient to remove doubts concerning the Qur'an and Islam. He concluded that religious sciences should be taught at modern schools on the one hand, and modern sciences at religious schools on the other. "This way," he said, "the people of the school will be protected from unbelief, and those of the madrasa from fanaticism." After completing a lifetime of almost a century, with every minute spent in the service of faith, Bediuzzaman Said Nursi departed from this world on the morning of March 23, 1960, with complete honor, dignity and victory, leaving behind him the Risale-i Nur Collection that would illuminate this and the forthcoming centuries and a love that would be handed over from generation to generation until eternity.