Items related to Voices from the Other World: Ancient Egyptian Tales

Mahfouz, Naguib Voices from the Other World: Ancient Egyptian Tales

Voices from the Other World: Ancient Egyptian Tales 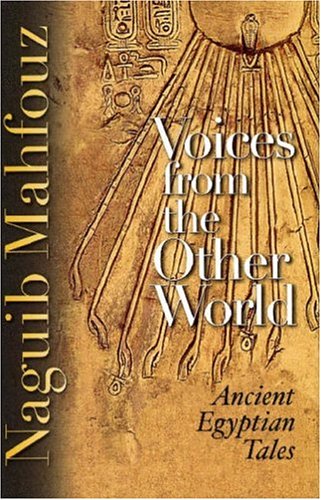 The forces of law and order disturb a district's too-perfect peace at the dawn of Egyptian civilization. A wise and popular pharaoh is betrayed by his own son, and by his dearest friends - then makes a most peculiar decision. A mummy returns to life after three thousand years, to confront the arrogant new race that now rules the land. A favored prince flees to a faraway country when the king dies suddenly, leaving his true love behind - only to come back to question her about their forty lost years. A famous young writer, composer of a legendary epic of Pharaoh's greatest battle with the Hittites, is carried off without warning by a mysterious disease - then speaks to us in this life from beyond the veil of death.
Such are the tales that make up this volume of five masterly stories by the young Naguib Mahfouz, all inspired by the Egypt of the pharaohs. Like three novels set in ancient times that he also published early in his career, these stories reveal his wide reading of Egypt's (and the world's) oldest history and literature. All of these gems, however, are very much his own creations. Their voices speak with the familiar genius of Egypt's greatest modern writer - though they call from a very different world than the one for which he is best known.

Nobel laureate Naguib Mahfouz reaches back millennia to his homeland's majestic past in this enchanting collection of early tales that brings the world of ancient Egypt face to face with our own times.
From the Predynastic Period, where a cabal of entrenched rulers banish virtue in jealous defense of their status, to the Fifth Dynasty, where a Pharaoh returns from an extended leave to find that only his dog has remained loyal, to the twentieth century, where a mummy from the Eighteenth Dynasty awakens in fury to reproach a modern Egyptian nobleman for his arrogance, these five stories conduct timeless truths over the course of thousands of years. Summoning the power and mystery of a legendary civilization, they examplify the artistry that has made Mahfouz among the most revered writers in world literature.

NAGUIB MAHFOUZ was born in 1911 in the crowded Cairo district of Gamaliya. He studied philosophy at Cairo University, then worked in various government ministries until his retirement in 1971. His first three published novels were Khufu's Wisdom (1939), Rhadopis of Nubia (1943), and Thebes at War (1944), all of which are set in ancient Egypt. These political and philosophical critiques disguised as historical romances show the unmistakable signs of a burgeoning literary genius. He went on to write more than 35 other novel-length works, plus hundreds of short stories and numerous cinema plots and scenarios, many of which have been made into successful films. Naguib Mahfouz was awarded the Nobel prize for literature in 1988. In 2006, he died at the age of 95.