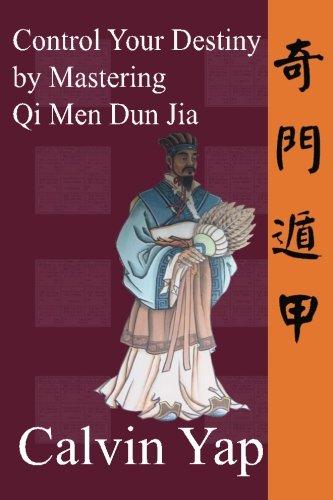 It was recorded in the Chinese history that Qi Men Dun Jia, together with Da Liu Ren and Tai Yi Shen Shu are the highest Three Arts or Three Styles in Chinese Meta-physics. It was said that these Arts can only be practice by the Emperor or their advisors. Commoner will be executed if being caught practicing it. This book is written in such a manner that it can be used as cover-to-cover reading, as well as for reference by practitioner. This book is divided into 5 parts: Part I - Basic, Part II - The Ingredient, Part III - Advanced Ingredient, Part IV - The cooking, Part V - the Fine Dining. So, it is similar to the process of preparing the food, cooking the food and eating the food. The book started off by providing history of Qi Men Dun Jia and famous historic figures (e.g. Zhuge Liang, Mao Zedong) that used it to win war. Part I - Basic is some basic concept of Chinese Meta-Physics and it is for those who don't have any background. Understanding this section is important for those who want to, not only learn Qi Men Dun Jia but Chinese Meta-Physics as a whole. Part II - The Ingredient breaks down each elements of Qi Men Dun Jia and it's attributes. Part III - Advanced Ingredient consists of more advanced information on Qi Men Dun Jia. It contains information about Stems Combinations, Ba Men combinations and Jiu Xing & Ba Men combinations. In addition, Qi Men Dun Jia special charts are provided and most importantly, it's usage. Part IV - The Cooking, described how to plot Qi Men Dun Jia chart in 2 methods (Chai Bu and Zhi Run). Part V - The Fine Dining are examples on how Qi Men Dun Jia can be applied.

I have been a Chinese Meta-Physics student for many years now and there isn't a single book that covers the topic of Qi Men Dun Jia in English. Most of the books are in Chinese. Hence, it is my Sifu (Master) dream as well as my dream to bring the art of changing luck using Qi Men Dun Jia to the audience that can't read Chinese. Qi Men Dun Jia is known as "the king of art and art of king" in ancient Chinese. This is because it can only be practiced by the king and due to its power, it can surplus all other Chinese Meta-Physics techniques. This is the first book I am writing and the format is closely similar to how Qi Men Dun Jia books in Chinese were presented. I planned to write 2 more books; mainly more advance techniques and Qi Men Dun Jia Calendar to be used by people who bought my books.