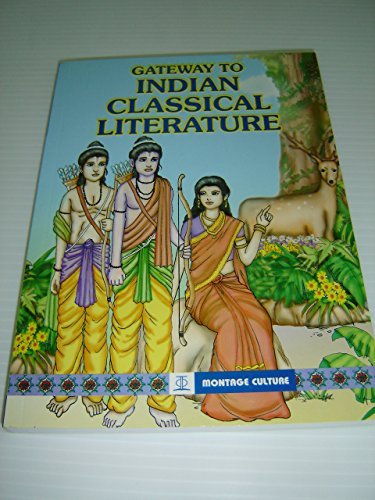 Gateway to Indian Classical Literature (Montage Culture) This book covers literature from the Ancient, Pre-Medieval, Medieval and Post-Medieval periods // Traditional Indian literature was primarily composed of verses and was oral rather than written. The earliest works were sung or recited and were thus transmitted from the teacher to the disciple. These compositions saw many generations before being written down. As a result, the original time of composing a text dates several centuries back from the recorded time of its compilation. Among the most ancient literature were the Vedas and the Upanishads. But the two masterpieces of this era were the Ramayana and the Mahabharata. As time passed, in the pre-medieval era came the great Indian dramatist and poet, Kalidasa. Also remarkable was Aryabhatta, the famous astronomer. It was during this period that the first Hindi poem was written by Mahasiddha Saraha. In the 14th century the Persians and Turks invaded India, beginning the influence of Persian and Islamic culture. As such classical Persian poetry emerged, which propelled the later growth of Urdu literature. The famous Pahelis and Mukaris by Amir Khusro, and Dohe by Kabir marked the medieval period. During the post-medieval period the Hindu pietistic movement began. This period had the emergence of writers like Abdur Rahim Khankhana and Mirza Ghalib. Ardha-kathanak by Banarasidas, the first autobiography in Hindi was also written at this time. It was in this period that Bankim Chandra Chaterjee composed 'Vande Mataram' the immortal song. With the establishment of vernacular schools in the early 19th century, a great impetus was given to popular prose. /// This is a great Christian product sourced from BIML - Bible In My Language, the leader in foreign language Bibles and outreach materials from Baltimore, Maryland in the USA. BIML stocks Bibles in more than 600 languages.