Items related to Orang Asli and Their Wood Art

Orang Asli and Their Wood Art 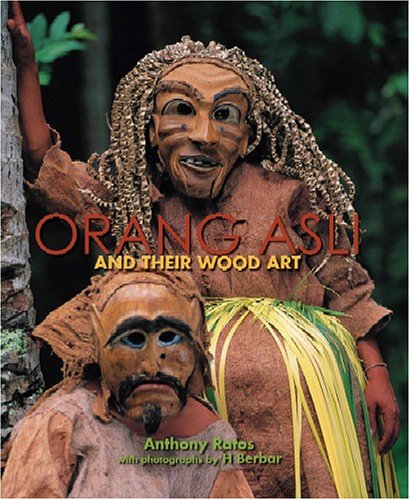 Orang Asli and their Wood Art gives a fascinating account of the art, culture, customs and beliefs of Peninsular Malaysia¡¦s three main Orang Asli groups ¡V the Negrito, the Senoi and the Proto Malays. This book provides a rare insight into the nomadic world and bamboo culture of Malaysia¡¦s first peoples, who rely on the forest ecosystem for their everyday needs, but who never take more than necessary to survive. Lavish full-colour photographs by H Berbar capture the Orang Asli and their life in the jungle, from hunting with blowpipes, fishing with bamboo traps, to tattooing the face with jungle dyes.

Orang Asli and their Wood Art is an invaluable addition to the scarce literature available on Peninsular Malaysia¡¦s first peoples.

Datuk Anthony Ratos is a dedicated friend of the Orang Asli, and has taken up many of their causes. His first contact with the Orang Asli was during the war, between 1942 and 1945, when he was taught the native secrets of foraging food from the jungles. Later, as a trainee teacher at Kirkby College (UK), he chose the aboriginal people of Peninsular Malaysia as the subject of his thesis. His interest in, and love for, the Orang Asli was further deepened when he served as Deputy Commissioner of the Orang Asli in Pahang from 1958 to 1963. He discovered the astonishing wood ¡Vcarving skills of the Jah Hut and Mah Meri tribes, and has collected hundreds of their sculptures and masks. He is known regionally and internationally for his involvement with aboriginal communities in Malaysia. Datuk Anthony Ratos is founder director of the Yaysasan Kesenian Orang Asli.

H Berbar is a native of Paris, where he studied photography before working with leading press and photo agencies in France. He has travelled extensively throughout Asia, Europe, Africa and South America and has more than 25 years¡¦ experience as a photojournalist. A prize-winning photographer, his clients include leading international publishers and established corporate clients. He has been based in Kuala Lumpur, Malaysia for the last 10 years.

1. Orang Asli and Their Wood Art