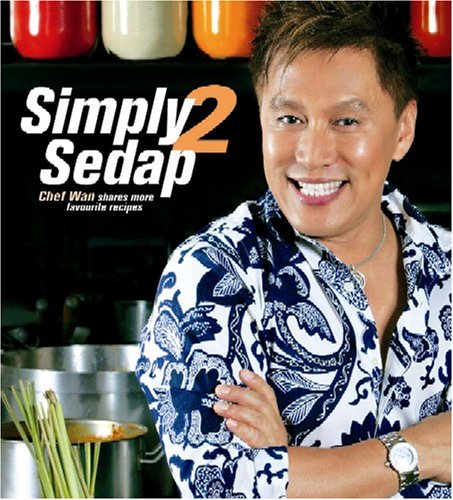 Ever since Chef Wan was appointed food ambassador by the Malaysian government and resident chef of the Asian Food Channel, there can be no better person to present an amblage of Asian and Western dishes. In this book Chef Wan revives fading Malaysian culinary gems, celebrates regional Asian favourites and showcases Western recipes adapted for the Asian palate. With years of experience as a chef and television personality behind him, Chef Wan is without doubt, perfectly poised to promote Asian cuisines to the West and Western-style cooking to Asia.

The recipes are well-thought through and designed with approachable steps that are achievable even at the hands of a novice. Ingredients used are also readily available. Filled with vibrant, beautiful illustrations of the recipes, Simply Sedap 2 is both a treat to the palate and the eye.

Chef Wan's scale to the top of culinary scene in Asia is both remarkable and inspiring. An accountant by training, he went on to earn an Associate Degree in professional Chef Training and Hotel Management from the California Culinary Academy, San Francisco, and a degree from the Ritz Hotel's cooking school, Ecole de Gastronomie Francaise Ritz-Escoffier, in Paris. The well-travelled chef then worked in various countries, including the United States, Canada, Italy, France, Hong Kong and Bangkok, as well as on board the cruise liner Royal Viking. Since the early 1990s, Chef Wan has also appeared on a great many television programmes, making him a household name and a well-loved personality, especially in Malaysia and Singapore. The cooking shows he hosted aired in much of Asia (including Singapore, India, Japan and China), Australia, Norway and the United States. He has also co-hosted culinary tour shows with other celebrity chefs, such as Martin Yan (The Best of Asia) and Anthony Bourdain (No Reservations). Today, Chef Wan is the resident chef of the Asian Food Channel, a 24-hour food cable television channel that is broadcast in nearly 20 Asian countries. Chef Wan was also the official co-ordinator of the Gourmand World Media Awards 2005 held in May in Kuala Lumpur, Malaysia.

Buy Used
Condition: As New
2006 paperback no marks and is... Learn more about this copy

Book Description Marshall Cavendish Cuisine, 2006. Paperback. Condition: As New. 2006 paperback no marks and is in great conditionAND AS ALWAYS SHIPPED IN 24 HOURS; and emailed to you a USPS tracking number on all orders; all books are sanitized and cleaned for your protection before mailing. PLEASE NOTE OVER SEAS BUYERS if the book extra large or heavy there will be additional postage due to the new US Postage rates. Seller Inventory # 140302055