Items related to Wavelet Analysis and Its Applications: Numerical Methods,... 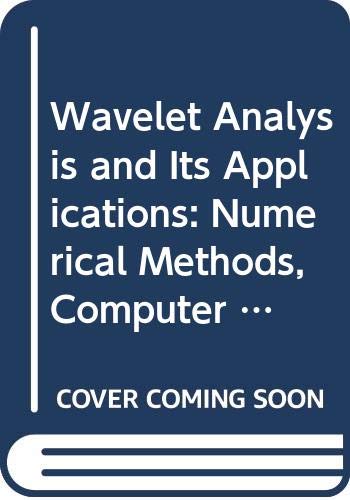 The subject of wavelet analysis has been around for less than 15 years, yet it seems to be popping up everywhere. The major reason for this is its usefulness in applications. Wavelets reduce the data requirements in fields such as signal processing and approximation through their localization property: A function that is zero in an interval has a wavelet expansion whose partial sums are small or even zero. Since most of the information in a signal is in the region where it changes, only the local data corresponding to it needs to be considered. Wavelets do this much better than classical methods because of their "zoom-in" and "zoom-out" capabilities. Hence, wavelets appeal to scientists and engineers in any field that requires analyzing large amounts of data.

This is an introductory, self-contained book on wavelet analysis and its applications, focusing on computer graphics and economics. The only prerequisite is a basic knowledge of calculus and linear algebra. For this reason, preliminary material on functional analysis, function theory, and Fourier analysis are covered in Chapter 1. The driving force of the development of wavelet analysis is described in Chapter 2 using step functions and Haar wavelets. Integral wavelet transform, discrete wavelet transform, classification of wavelets, multiresolution analysis, and wavelet algorithms for the decomposition and reconstruction of functions are presented in Chapter 3 of the book. The applications of wavelet transform in computer graphics and in economics are discussed in Chapters 4 and 5, respectively. Finally, Chapter 6 discusses some advanced material such as biorthogonal wavelets, two-dimensional wavelets, nonseparable multidimensional wavelets, and wavelet packets.