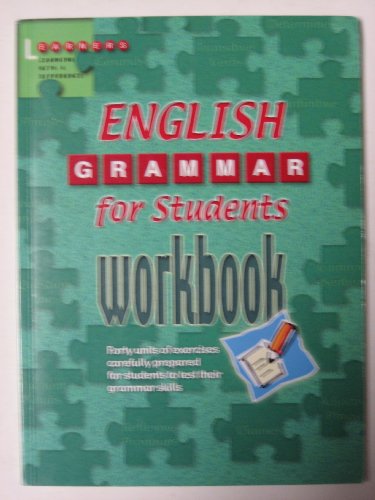 English Grammar for Students Workbook has been written primarily for students using English Grammar for Students and gives them an opportunity of testing themselves on the grammatical concepts introduced and explained in that book. At the same time, the full explanations given in the introduction to each exercise mean that it may be used as an independent self-testing tool.

There are 40 units, each containing four sets of exercises, graded for difficulty from A to D. Each exercise contains 8 to 16 questions, which vary from straightforward to fairly challenging. The first answer (in some cases the first two or three) is usually provided, so that the student has clear guidance as to the kind of answer expected.

The order of the units followed roughly the order of topics in English Grammar for Students, but some closely related topics that are dealt with in separate chapters in that book are here brought into closer association. The intention has also been to expand and develop some of the grammatical points made in English Grammar for Students, so that users not only consolidate what they have learnt but also widen their knowledge.
-Singapore Math, Inc.

Shipping: FREE
From Thailand to U.S.A.