Items related to Shoes Too Big (Continuing a Legacy of Hope and Transformatio...

Khoo, Henry Shoes Too Big (Continuing a Legacy of Hope and Transformation)

Shoes Too Big (Continuing a Legacy of Hope and Transformation) 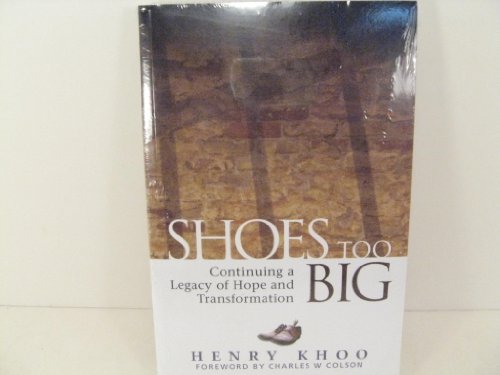 "Shoes Too Big chronicles the faithfulness of the Khoo family's 'lonely' vocation in prison ministry, and the stirring testimonies of lives touched behind bars. The story movingly brings to life the pronouncement of their Lord Jesus at the dawn of His ministry when he said 'He (the father) has sent me to proclaim release to the captives' (Luke 4:18), and at the evening of his public ministry when he commended those blessed of his Father by saying, 'I was in prison and you visited me' (Matthew 25:36). "Some shoes might be too big initially, but if one keeps walking (and growing and giving in trust and obedience), sooner or later it will fit. Moreover, it is the feet and not the shoes that make the difference. Hence the comforting words, 'How beautiful upon mountains (and in the dark corridors of prisons), are the feet of those who preach good news.' "Such is the unique legacy of Revd Henry Khoo, who gingerly continued in the footsteps of his father, the late Revd Khoo Siaw Hua. The footsteps continue as reflected in the prayerful commitment of Joshua,'...but as for me and my house, we will serve the Lord.' (Joshua 24:15). This is given expression by the third generation's involvement in prison ministry, with Timothy Khoo's work at Prison Fellowship International." The Most Revd Dr. John Chew The Biship of Singapore and The Archbishop of the Anglican Province of South East Asia