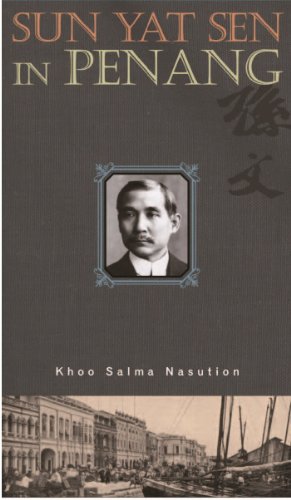 As a young revolutionary, Dr. Sun Yat Sen travelled widely and lived amongst the Chinese communities abroad, including Japan, North America and Southeast Asia. He mobilized the overseas Chinese with the dream of saving the Chinese nation. This book tells the story of how the Second Guangzhou Uprising, a turning point of the 1911 Chinese Revolution, was planned from a place 2,400 km away in Penang in present-day Malaysia.

Khoo Salma Nasution is a Penang-based author and heritage advocate. She has written more than seven books, including 'Streets of George Town, Penang' and 'More Than Merchants'. She is the custodian of the Dr. Sun Yat Sen base at 120 Armenian Street.

The regional span of Sun Yat Sens republicanism FEW DATES in East Asias recent past act so well as a watershed for the scholar writing on the modern history of the region as October 10, 1911 does. On that day, the Wuchang Uprising in China started what became known as the Xinhai Revolution that effectively ended Chinas dynastic history on February 12, 1912. That day, the last emperor, Pu Yi, abdicated, and the Republic of China came into being. Today, exactly a century later, China, India and Korea, among other Asian polities, have joined Japan as major economic powers. This conjures images of the future that require scholars in the region and elsewhere to revisit events of the past. More excitingly, we are forced to ponder some concepts we take for granted today. For example, we are unable to understand how unthinkable the phrase Republic of China was a hundred years ago, not to mention Peoples Republic of China. For all but a small handful of educated Chinese, China had to have an emperor. Putting republic together with China, in any language, was to speak nonsense. One of those who could think of a China without an emperor in the late 19th century was Dr Sun Yat Sen (aka Sun Zhongshan). What was also highly significant about him was that he was educated overseas. In 1894, at the age of 28, he founded his first revolutionary organisation, the Xingzhonghui (Revive China Society). This was in Honolulu. A year earlier, the Sino-Japanese War had taken place, which China lost badly, and through which Japan turned Korea into a colony. This precipitated various attempts to reform the dynastic system, the chief of which was made by Kang Youwei who tried over three months in 1898 to pursue changes from the top down, with the help of the emperor. These 100 Days of Reform ended in tragic failure. Kang fled, travelling the world to study its many political systems. Among the places he went to was Penang, which he visited just after turn of the century. His utopian book, the Datongshu (The Book on the Great Unity), was once named by a Beijing publisher as one of the most influential books in Chinese history. A calligraphic script cut into a boulder at Penangs Kek Lok Si Temple is said to have been written by Kang. After his escape from Beijing, Qing conservatives continued to defend the system but were forced to carry out certain reforms after the palace-condoned Boxer Rebellion against foreigners was quelled and the capital was invaded by a collection of armies. These reforms were however too superficial and too uninformed to succeed. Sun Yat Sens many organised attempts throughout the first decade of the zoth century to topple the Manchu Dynasty proved to be failures as well. The Xingzhonghui that he founded grew to incorporate other groups, and in 1905 emerged in Tokyo as the Tongmenghui. Its Nanyang branch was established in 1906 in Singapore, but was later moved to Penang. The Tongmenghui went on in 1912 to form the backbone for the Guomindang that ruled China until 1949 and governs Taiwan today. No doubt it was the Tongmenghui that had inspired those involved in the Wuchang uprising in 1911, but it was only by accident that it took place, and Sun Yat Sen only read about it the following day in a newspaper in the US, where he was travelling and raising money. A hardworking man, Sun journeyed greatly to raise political support and money in Overseas Chinese communities. The most sizeable populations of Chinese were in Malaya and Singapore. - See more at: http://www.sunyatsenpenang.com/?p=790#sthash.U6vJIGMx.dpuf --Ooi Kee Beng, Penang Economic Monthly . December 2010 - See more at:

Book Description Areca Books, George Town, Penang, 2008. Paperback. Condition: New. First edition. Sun Yat Sen, the father of the Chinese Republic, would never have lived as long as he did or have achieved as much if it had not been for the support of the overseas Chinese. One of his main bases was Penang in the British Straits Settlements. This book with pictures and informed text recounts his time on the island. 130 pages. Please see the scan of the contents page for further details. Weight: 0.4kg. Post free within Malaysia. Seller Inventory # ML3053