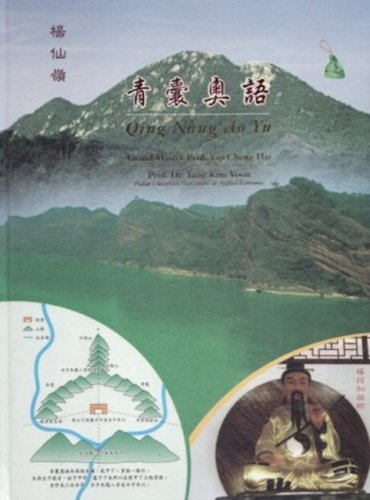 We have read many English Fengshui books available in the market and found that only very few of them have correctly defined and interpreted Classic Fengshui. Those few ones correctly defined and interpreted Classic Fengshui have failed to include their books with detailed explanations of real-life case studies, neither nor have they successfully satisfied our readers that what they wrote in their books is a complete system of Fengshui which can apply in real-life situation and cross-examined with the historical sites of Yin Yang Zhai and Temples still available and well-kept in China. As such, in Tian Yu Jing, we write to make up for the above-mentioned omissions and we so far have written and published our books: Qing Nang Ao Yu and Tian Yu Jing which are the only Chinese Classic Fengshui books in the English market now based on the original literatures of Yang Jun Song, the Royal Fengshui Master of Tang Dynasty some 1200 years ago with intention to fill the gaps of the present English market where only very few English written Fengshui books about Classic Fengshui. While trying our best to make the contents of our Tian Yu Jing as lively as possible and also at the same time to touch more deeply upon the Loupan and the methods for using this amazing instrument which is known as Universe on a plate . The Completion of this book actually bases on the original version of Tian Yu Jing, defined and passed down from our Great Grand Master Li San Su of Qing Dynasty, the founder of Ganzhou Yu Che Tang round 1700 to YGFS Shifu Master Prof Dr Yang, the present Tang Ju (Lineage Holder and Chairman) of China Ganzhou Yang Gong Fengshui Tang. Having read our Tian Yu Jing, You will have a better understanding of FS with all the missing gaps being filled up and can practise Yin Yang Zhai and Temple FS audit more confidently. After going through lots of significant real life case studies in the book, you will be able to determine accurately of a site based on the surrounding environment of Yin Yang Zhai and be able to tell the prediction of time and events. Yang Jun Song the originator of Yang Gong Fengshui, developed a set of complete theories and practicals based on the ZhangShu ( the Book Of Burial, by Guo Pu 264-320 AD). These Theories and Practicals are not only completely self-contained (meaning that it can completely audit any situation, whether Yin or Yang Zhai, without having to borrow Theories and Practicals from other sources, because IT IS the original source of all other San He and San Yuan Theories and Practicals. We understand that most of the readers had studied under some Masters, San He Theories and Practicals, and that you find that what you had learnt is still inadequate, or you feel that there is something missing -- something is just not right because you could not use or practice even after you have completed the highest level of the course given by these Masters. Why is that so? Let us tell you why. It is very simple. All the San He theories that they teach are available in Chinese Bookstores. If you read Chinese, you'd know that these theories can be obtained for only a couple of hundred Ringgit. All you need to do is, buy a dozen of such books, the Classics and the Commentaries to these classics, and lay back and read away. And by the time you have finished reading all these books,.....Hey presto! You are a Master overnight!!! Is it that simple? No. These books only tells you the open secrets that are available everywhere. But all these books, the commentaries on the Classics, are nothing but commentaries and they only touch on the theoretical, and maybe superficial mention of the practical part of these theories. Our Qing Nang Ao Yu might be able to answer most of your questions in regards to our Chinese Classic Fengshui dating back to Tang Dynasty of Yang Jun Song and Jin Dynasty of Guo Pu some 1500 years.

Grand Master and Professor Yap Cheng Hai has more than 50 years of experience in Feng Shui. Though now primarily known as a Feng Shui master, he is equally well-versed in Chinese medicine, martial arts especially Wu Shu, Qi Gong, metaphysics, palmistry and philosophy. Grand Master Yap also captured a feather in his cap as a pioneering Feng Shui master who conducted his classes in the English language. This starting point was in the early 1980s in London, long before Feng Shui caught worldwide attention. Grand Master Yap s vast knowledge and technical skills are sought by other Feng Shui masters as well. He has offered his thoughts to other Feng Shui masters, including renowned author and speaker Lillian Too, who sought his advice when writing her early books. Today, Grand Master Yap is also a successful corporate figure with various business enterprises. Well in his 83s now, he follows a tight schedule and spends more than 50 days of training and seminar a year worldwide. While Grandfather of Prof. Dr. Yang Kim Voon was a principal of Malaysian Chinese Primary School , but also a relatively famous Fengshui Master those days in Malaysia, who handed down his knowledge to YGFS ShiFu Master Prof Dr Yang Kim Voon whom is also an indoor YGFS Disciple of Li San Su , a YGFS Lineage Holder of 1700 Qing Dynasty and now YGFS ShiFu Master Prof. Dr. Yang is handed down in a direct line of YGFS Lineage as the Tang Ju (Chairman) of Ganzhou Yang Gong Fengshui Tang. YGFS ShiFu Master Prof. Dr. Yang is the Principal & CEO of Ming Qing Fengshui Research Academy and also the Vice Chairman and General Manage of the 1st Fengshui Company Ltd in China incorporated in Ganzhou, named as Ganzhou Yang Gong Fengshui Culture Propagation Company Limited with a paid up of 2 Millions. Prof. Dato' Dr. Yang is also an Indoor Disciple of the World Famous and well-known Chinese Management Studies Master Prof. Su Dong Shui whom is the Chief Professor of Fudan University in Shanghai, a Top University in China where YGFS ShiFu Master Prof. Dr. Yang graduated with his Post Doctor of Philosophy in Applied Economics. His Fudan University Post Ph.D. Thesis titled:East and West Higher Education Comparative Research was graded as Distinction and published 5000 books First Edition in China in December 2006. YGFS ShiFu Master Prof. Dr. Yang is also an Indoor Disciple of Wudang Long Men Pai, learning Wudang Qi Gong and Martial Arts from Wudang Shan, Wubei of China, his Taoism Name is Cong Hu Over the years, YGFS ShiFu Master Prof. Dato' Dr. Yang assumes many Official Positions in Yijing and Fengshui areas such as the Honorary Advisor and President for many Fengshui Institution around the World and China such as Asian Yijing Academy, Chairman of Malaysia Chapter, China Ganzhou Yu Che Tang; Executive Director of China Ganzhou Yang Jun Song Research Institute and Academic Advisor to Ganzhou Yang Gong Mountain (Yang Xian Ling). He has been interviewed by many Press and TV Stations many times in China and Malaysia and also often invited for giving speeches in many International Yijing and Fengshui Conferences and was invited to participate in Ganzhou City Government's official forum for the discussion of cultural development in Ganzhou. Besides his academic works supervising his Masters and Doctorals Students, YGFS ShiFu Master Prof. Dr. Yang also supervised many fengshui thesis submitted by many World Famous Fengshui Masters doing their respective Research in Fengshui related areas at the levels of Master and Doctoral Degrees. So far, he has more than 31 Famous Fengshui Masters as his Disciples DiZi from different Fengshui Pai of different Countries such as Australia, United Kingdoms, USA, German, Singapore, Indonesia, Thilaind, China and Malaysia under his Ganzhou Yang Gong Fengshui Tang, learning Yang Gong Fengshui from him, most of them much older ones.