Items related to What Your Teacher Didn't Tell You (The Annexe Lectures,...

Farish A. Noor What Your Teacher Didn't Tell You (The Annexe Lectures, Vol. 1)

What Your Teacher Didn't Tell You (The Annexe Lectures, Vol. 1) 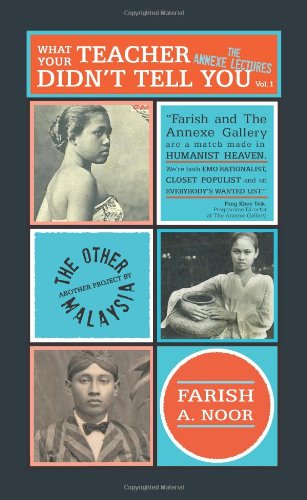 Farish A. Noor might just be Malaysia's hippest intellectual. His gifts are on full display in these expanded versions of public lectures that he delivered at The Annexe Gallery, Central Market Kuala Lumpur in 2008 and 2009. Find out how 'racial difference' became such a big deal in Malaysia, and contrast this against the way our distant ancestors lived. Discover the hidden stories of the keris, Hang Tuah and PAS. There's also quite a bit of sex. Erudite, impassioned and sometimes plain naughty, What Your Teacher Didn't Tell You is a stimulating plunge into aspects of our past that have been kept from us. There's even a bonus chapter! Illustrated with dozens of sepia-toned photographs, many from the author's collection of antiques.

Dr. Farish A Noor is currently Senior Fellow at the S. Rajaratnam School of International Studies (RSIS), Nanyang Technological University (NTU) Singapore and Affiliated Professor at Universitas Muhamadiyah Surakarta (UMS), Indonesia. Author of Islam Embedded: The Historical Development of the Pan-Malaysian Islamic Party PAS; The Other Malaysia; From Majapahit to Putrajay; Writings on the War on Terror and other books, he is both a political historian and human rights activist. He was once voted one of the top 40 Malaysians who have shaped Malaysia's Post-Independence history as well as one of the ten sexiest men in Malaysia by a group of professional babes who had nothing better to do over their extended lunch break. He has been a radio essayist for BBC Radio 4 and the BBC World Service; travels widely to do field research; collects antiques as his hobby and has a waistline that has not expanded since the age of 19. The 'Annexe lectures' was one of the public projects of the othermalaysia.org research site, which he runs with Dr Yusseri Yusoff.

In What Your Teacher Didn't Tell You, Farish Noor successfully deconstructs conventional history -- the one that was so easily spoon-fed to those in my very own generation -- and uncovers stark truths about Malaysia's past that are little known and much less discussed. It is a painful reality that Malaysians have been manipulated through the inaccurate retelling of stories of the keris and Hang Tuah, all for the purposes of political and ethnocentric control. This book's contents should be consumed voraciously and regurgitated constantly. Then will Malaysians boldly reclaim its religious and cultural heritage, and shamelessly so, for it represents a rich myriad of mixed origins and not the monoethnic garbage we have falsely believed. Let our future be firmly grounded on a true past. --Tricia Yeoh, former director of the Centre for Public Policy Studies, Malaysia.

These lectures by Malaysia's most articulate and persistent social critic lay bare some truths behind Asia's most hard-to-untangle society by deconstructing its history and cultural tales, connecting the dots from founding 15th-century hero Hang Tuah to today's ruling UMNO party. --The Wall Street Journal

Farish Noor brings to bear a journalist's hunger to speak to real people and record their stories with an academic's rigour, while his status as 'the thinking woman s crumpet' means that one is never quite sure whether the women in the audience are hanging on his every word or just gazing dreamily at him.... --Jonathan Kent, former BBC Malaysia correspondent

1. What Your Teacher Didn't Tell You (The Annexe Lectures, Vol. 1)